You are here: Home » Articles filed under: 'News' » Article: 'CSIRAC' 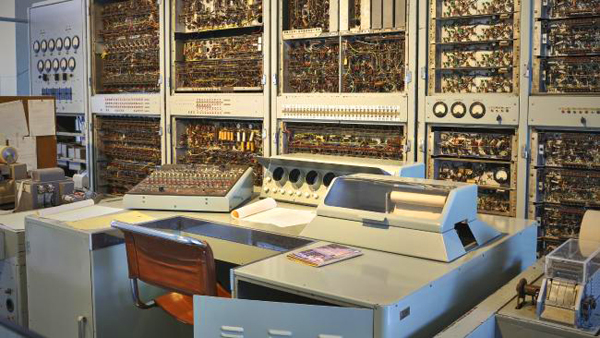 The Oscar-winning film The Imitation Game might have depicted the real-life exploits of British mathematician Alan Turing, who helped decrypt the German Enigma code during World War II, but the film didn’t elaborate on what is considered his greatest legacy.

In 1936, Turing published On Computable Numbers, With an Application to the Entscheidungsproblem, deemed the most influential document of the computer age. With this he laid the foundations for the modern computer, for software and for artificial intelligence. He defined the notion of a modern computer as a flexible, programmable universal machine; a machine that could compute anything that a human could, but faster.

Based on Turing’s theories, and using technology from wartime radar systems, between 1947 and 1949 a group of enterprising Australian scientists and engineers built this country’s first digital computer, the fourth built in the world. It is considered one of Australia’s foremost technological achievements.

Most surprising, however, is that this computer still survives. It is now the world’s only remaining intact first-generation computer and it is on display at the Melbourne Museum.

Named CSIRAC (pronounced sigh-rack), it was designed and built by Trevor Pearcey, Maston Beard and Geoff Hill at the CSIRO’s Radiophysics Laboratory in Sydney before it was moved to the University of Melbourne.

CSIRAC filled a room the size of a double garage and required enough electricity to power a suburban street. It might have been primitive compared to today’s computers but it performed groundbreaking work. It was, for instance, the first computer in the world to play music, causing a stir at Australia’s first computer conference in August 1951.

CSIRAC also provided the first electronically computed 24-hour weather forecast in Australia. It ran the calculations to find the centre of the galaxy in 1953 and helped with the engineering for Australia’s first skyscraper and for the Snowy Mountains Scheme. It ran studies in road and air traffic congestion. On a more basic level, it calculated home loan repayments and enabled psychological research.

When I visit the Melbourne Museum, I am shown the CSIRAC display by the head curator, humanities, Richard Gillespie, who says it is extraordinary the computer has survived, alongside a software library considered the oldest in the world. Overall, the museum’s CSIRAC collection consists of over 300 objects, over 300 images and over 1000 documents.

“It really [played] a role in defining computing for 15 or so years in a way that none of those [other] early computers did,” Gillespie says.

He says that CSIRAC opened up a new digital world within Australia. Many of the founders of the Australian software industry were trained on it.

“I think it is such an iconic object,” Gillespie says. “If you look at it and realise there is more computing power in your little desk calculator and your mobile phone — but we have come so far in the space of 60 years, which is quite extraordinary.”