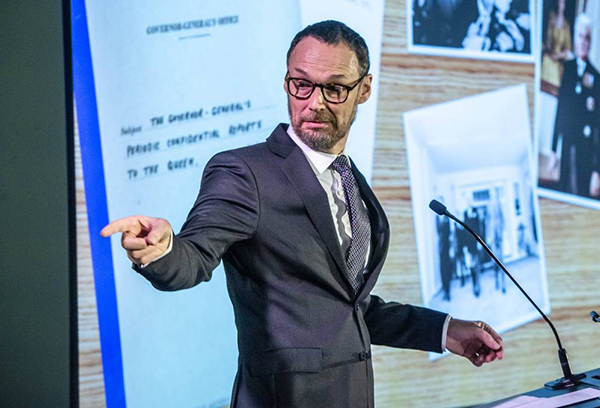 How much further does the National Archives need to go to get more funding to preserve irreplaceable documents?, The Canberra Times, 24 May 2021

It’s a sad state of affairs when a national collecting institution is forced to go cap-in-hand to the public – the same taxpayers who are already funding it – and ask for donations.

But that’s what happens when, as is the case with the National Archives of Australia, you’re unexpectedly left out of the 2021-2022 budget.

This was despite a review undertaken and publicly released in March this year, recommending the government provide the agency with $67.7 million in funding over seven years to help digitise the materials most at risk.

But while several other institutions, including the National Gallery of Australia and the National Museum of Australia, received funding of varying amounts, the archives was conspicuously absent.

This was especially notable when you consider how vocal its director, David Fricker, has been about the institution’s funding woes.

Its situation is becoming increasingly desperate as thousands of records documenting Australia’s history remain at stake without adequate funding and resources to collect, preserve and digitise its collection of records.

This shouldn’t be a political issue; the archives has a legislative mandate to deal with government records and theory should have no control over the scope or nature of what it collects. In other words, it exists for a particular purpose but is being given less and less funding with which to fulfil it.

Meanwhile, requests to view documents, whether by members of the public or academic researchers, are now taking actual years to meet.

This, for an institution that is supposedly funded by the public, and performs a public role in the psyche and culture of the Australian people.

It’s never a good idea to compare any national cultural institution with the Australian War Memorial, but it used to be that the one that put the best case for funding – or made the most noise – would eventually hit pay dirt. The memorial certainly has.

The archives are also a repository for individual service records and documents relating to wartime in Australia, not to mention hundreds of thousands of paper trails representing Australian life through the decades.

But while other institutions have tended to stay quiet over the years when it comes to the insidious effects of the never-ending efficiency dividend on public collections and programs, Mr Frickers has been remarkably candid about the dire future faced by the archives.

And why shouldn’t he be? When an institution is unable to perform its most basic of duties, the public has the right to hear it from the person at the helm. Ad nauseum, if need be.

As he told The Canberra Times last month, “the principal risk is that we do permanently lose records contained in the archives”.

How better to translate this threat into a plea for money? The government has not been convinced, but it’s not clear what, exactly, is standing in the way of a funding boost.

Instead, the narrative continues to put individual institutions against each other, regardless of how they operate in the real world, albeit in the Parliamentary Triangle.