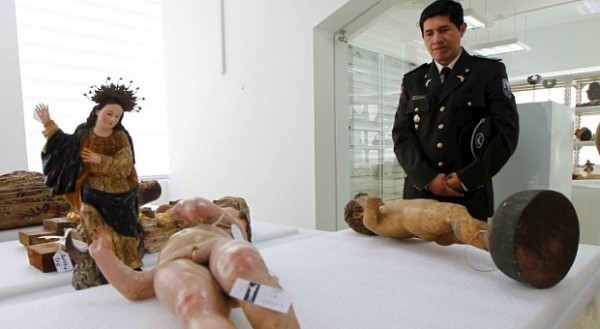 A police officer stands near some of the restituted objects during a news conference at Ecuador’s National Cultural Heritage Institute in Quito. Source: The Arts Newspaper.

Argentina and Spain have returned 567 heritage objects to Ecuador, the country’s minister of culture and heritage, Guillaume Long, announced at a press conference on 3 February. The formal handover took place in Quito, the country’s capital, in the presence of Argentina’s ambassador to Ecuador, Alberto Alvarez Tufillo, and the Cultural Counselor of the Spanish Embassy in Ecuador, Luis García, who said: “The protection of the heritage goods is a pressing need, because they are unique and irreplaceable.”

The objects, returned between December 2015 and January of this year, include colonial-era works, archaeological artefacts from indigenous cultures and two maps. Spain returned 71 works of art from the colonial-era Quito school and 58 other objects. Most of the 438 objects returned by Argentina were ceramics. According to local media, some of the restituted works will be shown at national museums.

The restitution process was overseen by the National Commission for the Fight Against Illicit Traffic of Cultural Property. Since its founding in 2010, the government bureau has been involved in the repatriation of 4,998 objects from abroad, according to an official statement by Ecuador’s ministry of culture and heritage, as well as 6,894 objects within the country. Guillame Long said that Ecuador is among the most active countries in recuperating stolen heritage.