You are here: Home » Articles filed under: 'News' » Article: 'Cultural sector worth £5.9bn to UK economy'

Arts Council England has published the findings of an independent report claiming that the arts and culture sector accounts for 0.4% of gross domestic product, with £5.9 billion worth of gross value added to the UK economy in 2011.

The results form part of an investigation by the Centre for Economics and Business Research that ACE says is the “first comprehensive analysis to determine the value of art and culture to the modern economy at a national scale”.

The report found that these areas combined provide 0.45% of total employment in the UK – on average 110,600 full-time equivalent employees. The performing arts were the biggest contributor to employment with around a third of this total.

Meanwhile, the report also reveals that the sector’s contribution to the UK economy has actually increased since the recession began in 2008, despite turnover in the sector falling slightly in the period.

ACE chief executive Alan Davey said: “We fund arts and culture because they have a unique ability to fire our imaginations, to inspire and entertain us. The contribution culture makes to our quality of life, as a society and as individuals, will always be our primary concern. But at a time when public finances are under such pressure, it is also right to examine all the benefits that investment in arts and culture can bring – and to consider how we can make the most effective use of that contribution.

“I am grateful to CEBR for their comprehensive and enlightening report and I am gratified that it quantifies what we have long understood. That culture plays a vital part in attracting tourism to the tune of £856 million a year; that arts centres and activities transform our towns and cities and drive regeneration, making the choice to maintain investment in culture a forward thinking one for local authorities; and that the arts support the creative industries and improve their productivity.

The full report is available to download from www.artscouncil.org.uk 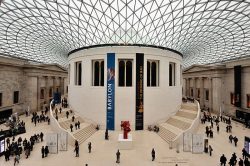 British Museum, Picture by: Eric Pouhier, Source: Wikimedia
Positions Vacant » View All
» Exhibition Technician – Canterbury Museum
» Marketing and Campaigns Officer – WAM
Latest News » View All
Nadine Dorries 10th Culture Sec since 2010
“to fight the woke warriors at culture” Read more.
What place for public statues in the history of art?
Neil McGregor on value of retaining statues Read more.
Statues in the context of art sculpture
- modelling, animation & so much life Read more.
AHRC explores digital future of UK cultural
& heritage – links to Collecting the West Read more.
Aus research policy env “a slow tragedy
unfolding” business R&D 0.9% - 50% OECD av Read more.
Top +
Council of Australasian Museum Directors, c/o Ms Daryl Karp, Museum of Australian Democracy at Old Parliament House PO Box 3934 Manuka, Australian Capital Territory 2603 Australia, © CAMD 2021
Copyright: All information and resources provided on this website remain the copyright of the Council of Australasian Museum Directors. Permission is granted for viewing and downloading for personal and not for profit purposes. Those wishing to reproduce any materials for commercial, educational or other uses are requested to contact us.
Disclaimer: The content of this website is provided for information purposes only and is not intended as a substitute for professional advice. No claim is made as to the accuracy or authenticity of the content of the website. The Council of Australasian Museum Directors does not accept any liability to any person for the information or advice (or the use of such information or advice) which is provided on this website. The information on our website is provided on the basis that all persons accessing the site undertake responsibility for assessing the relevance and accuracy of its content. No responsibility is taken for any information or services which may appear on any linked web sites. Hostgator.
.