Simon Darcy and Bronwen Dalton, ‘We need ABS arts and sports data to understand our culture‘, The Conversation, 14 August 2014

The Australian Bureau of Statistics (ABS) last week released its 2014-2018 forward work plan. The work plan confirms the June media release that arts and sport data will disappear from the ABS-funded component of culture, sport and recreation statistics collection as part of ongoing expenditure reductions of A$50 million over three years started under the previous Labor government.

This includes the disbanding of the National Centre for Culture and Recreation Statistics that strategically directed the ABS data collection and reporting in this area. The implications are significant where for example the ABS General Social Survey under “social conditions” no longer makes any reference to arts or sport data.

A culture built on volunteers

Australia prides itself on its artistic capacity, sporting ability and participation, as well as the selflessness of its volunteer workforce across all sectors of civil society. The majority of arts and sport are delivered by the not-for-profit sector through volunteer workforces. It is disappointing that the ABS has had to make decisions to severely curtail data collection and reporting in these important areas of citizenship.

From the grassroots sports grounds, to community arts centres, to national sport and arts organisations with their focus on excellence, all have significant contributions from their organisation’s volunteer workforces.

Not-for-profit organisations that manage these volunteer workforces are, according to ABS data, one of the biggest employers in Australia. They account for some 1 million employees or 8.6% of overall employment – up from 890,000 in 2006-07.

The not-for-profit sector generated income of A$107.5 billion (up from A$76 billion in 2006/2007) and has been at the forefront of developing a more innovative approach to its activities through social enterprise.

What is as disconcerting is that the General Social Survey has also discarded its modules on indigeneity and disability.

While key stakeholders may choose to fill the data and reporting space left by the ABS, the likelihood of this occurring given the budgetary squeeze in Canberra is questionable. For example, the Committee of Australian Sport and Recreation Officials and its predecessor organisation co-funded with the ABS the Exercise Recreation and Sport Survey 2001-2010.

Why we need this data

The data collected by the Australian Bureau of Statistics, and the General Social Survey in particular, provides the means to understanding and enhancing the economic, social and cultural impact of the not-for profit, arts and sport sectors on Australian society.

Research based on this data helps ensure evidence-based policies and educative tools that enable industry practitioners to understand and embrace best practice standards.

Without a central mechanism such as the ABS, sector-wide datasets cannot be compiled. This creates two important issues that cannot be established without the data:

More fundamentally, without data we are not in a position to say anything meaningful about Australian sport, arts or not for profits. We will lack answers to questions that range from the most straightforward – how many sports, arts or not-for-profit organisations are there in Australia? – to more complex ones, such as how does one assess the cumulative social and economic impact of these important sectors.

When it suits, ministers revel in Australia’s sporting prowess and cultural creativity; careful development and evaluation of policies in these areas are another matter. Of the 62 policies/discussion papers that the Coalition took to the 2013 federal election, not one referred to the arts or sport. Yet, we have a Minister for the Arts in Senator George Brandis and a Minister for Sport in Peter Dutton.

The report of the 2009 government-appointed Independent Sport Panel, chaired by industrialist David Crawford, declared that there was “an extraordinary dearth of robust data on participation in sport” and that a “lack of fundamental data on most aspects of the sport sector substantially inhibits an evidence-based approach to the development of policies and strategies”.

While the federal government does not have responsibility for delivery of arts and sport facilities and programs at grassroots level (since this falls largely to state/territory and local governments and the not-for-profit sector) it has been widely accepted, at least since the 1980s, that data on participation levels should be collected at national level.

It is only from independently gathered data from the ABS or other public agency stakeholders that policy-relevant information such as the following is brought to light:

Now governments of all persuasions are encouraging organisations in these sectors to supplement their income from other sources, especially philanthropy.

In a 2014 speech to the Australian Council of Social Service (ACOSS) conference, Social Services Minister Kevin Andrews outlined his vision of civil society, arguing that civil society should not be created nor controlled by the state as too much intervention denies citizens the opportunity to achieve something for themselves.

To summarise the ideas presented, civil society should stand apart and on its own two feet.

However, without information to inform a case for support, funds are unlikely to be forthcoming from a hard-nosed corporate sector which demands social returns on its investment.

This loss of data is shortsighted, ill considered and to the detriment of good governance, innovation and creativity in arts, sport and the wider not-for-profit sector, which is driven by being at the forefront of understanding social trends.

We implore the decision-makers to reconsider the loss or significant cutback or reduced reporting of such important data for understanding the size, dimensions, dynamism and contributions of Australia’s civil society.

Simon Darcy has received funding from the Australian Research Council, the Australian Sports Commission, Australian Paralympic Committee and is currently completing a research grant with Arts NSW. He is a current member of the Disability Council of NSW that advises the NSW Minister for Disability.Bronwen Dalton is a member of the board for the New South Wales Centre for Volunteering. 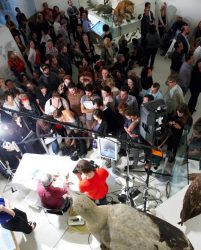 Melbourne Museum. Image: Jon Augier Source: Museum Victoria
Positions Vacant » View All
» Exhib & Creative Services Officer – Otago Museum
» Curator (Pacific) – TMAG
Latest News » View All
OM’s Ian Griffin names asteroid 53109 for
Martinphillipps Dunedin's Chills frontman Read more.
7 Pillars of Audience-focus – change from
product, to marketing, to audience-focus Read more.
A New Approach’s vision for arts & culture
- technocratic neoliberalism? Read more.
We can fund the arts in better ways
- a Smart Fund managing a levy partnership? Read more.
MA UK report on Redundancies –
after one year of Covid Read more.
Top +
Council of Australasian Museum Directors, c/o Ms Daryl Karp, Museum of Australian Democracy at Old Parliament House PO Box 3934 Manuka, Australian Capital Territory 2603 Australia, © CAMD 2021
Copyright: All information and resources provided on this website remain the copyright of the Council of Australasian Museum Directors. Permission is granted for viewing and downloading for personal and not for profit purposes. Those wishing to reproduce any materials for commercial, educational or other uses are requested to contact us.
Disclaimer: The content of this website is provided for information purposes only and is not intended as a substitute for professional advice. No claim is made as to the accuracy or authenticity of the content of the website. The Council of Australasian Museum Directors does not accept any liability to any person for the information or advice (or the use of such information or advice) which is provided on this website. The information on our website is provided on the basis that all persons accessing the site undertake responsibility for assessing the relevance and accuracy of its content. No responsibility is taken for any information or services which may appear on any linked web sites. Hostgator.
.