You are here: Home » Articles filed under: 'News' » Article: 'Culture Grrl on resignation of Gary Garrels' 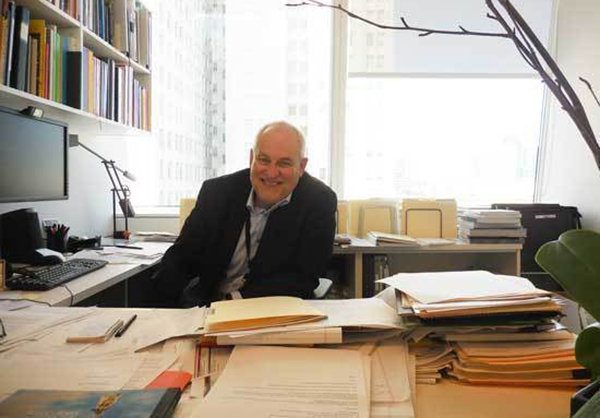 Gary Garrels in his SFMOMA office, in happier times (2016): Photo by Lee Rosenbaum.

In the second of what threatens to become a series of parlous CultureGrrl posts, I’m again risking the wrath of the thought-police by coming to the defense of another consummate museum curator who has had the misfortune of wandering into the cancel-culture crosshairs.

Joining Keith Christiansen, the Metropolitan Museum’s chairman of European paintings, in this predicament is Gary Garrels, the San Francisco Museum of Modern Art’s senior curator of painting and sculpture, who on July 9 precipitously announced his resignation, effective July 31.

“Don’t worry,” he said. “We will definitely still continue to collect white artists.” Failing to do so, he quipped, would be “reverse discrimination.”

Not funny. Some 269 (at this writing) mostly anonymous signatories to a Change.org petition to SFMOMA’s board demanded Garrels’ resignation, citing his use of allegedly “white supremacist and racist language.”

They got their wish, along with this note from the contrite curator: 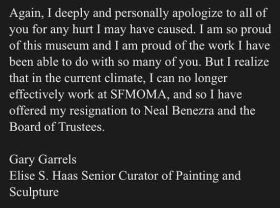 Image from the Instagram page of xSFMOMA Workers, the instigators of the anti-Garrels petition.

In my post last year about works that SFMOMA had bought with funds from a deaccessioned Rothko, I had praised Garrels as “a curator whom I greatly admire.” I regarded his move from New York’s Museum of Modern Art to San Francisco’s as a great loss for us East Coast-ers that never should have happened.

But don’t listen to me. Listen to Neal Benezra, SFMOMA’s director. His press-released statement on Gary’s resignation made no reference to the reasons for the curator’s departure. Instead, it praised his contributions in diversifying the collection with works of black, Latino, Native American and female artists: 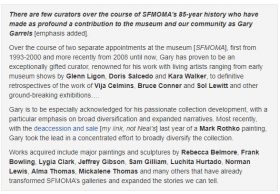 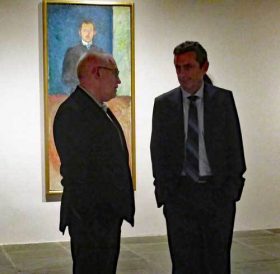 Gary Garrels with Neal Benezra, gazed upon by Edvard Munch’s “Self Portrait with Brushes,” 1904, at press preview for the 2017 New York showing at the Met Breuer of the jointly organized Munch survey
Photo by Lee Rosenbaum.

If there’s more substance to the petition-signatories’ grievances than distress over one insensitive remark, I haven’t yet seen it. What I can say is that over the many years that I’ve known Gary Garrels and admired his work (both at SFMOMA and during his stint as MoMA), I’ve seen not a hint of racism, let alone “white suprematicism.”

What I have perceived is unrivaled expertise at crafting intelligently installed, incisively explicated exhibitions and installations. His most ambitious project was the reinstallation of the permanent collection for SFMOMA’s 2016 Snøhetta-designed renovation and expansion, where I particularly relished the ample single-artist focus galleries, including those for Ellsworth Kelly… 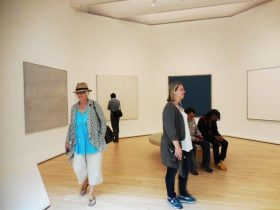 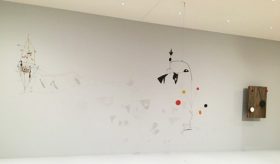 A small segment of the large Calder array for SFMOMA’s 2016 reopening All photos by Lee Rosenbaum.

I’ve several times had a chance to peruse traveling exhibitions that appeared both at SFMOMA and in New York (most notably, the 2016 Bruce Conner retrospective). The SFMOMA installation was, to me, always more compelling in its juxtapositions and elucidations.

Long before he became a target of those now accusing him of “toxic white supremacist beliefs regarding race and equity” (in the words of the petition), Gary stated the following (in an extensive 2009 interview for SFMOMA’s 75th anniversary Oral History Project, on p. 18):

As has occurred at too many museums, SFMOMA’s professional atmosphere has been infected by an epidemic of Covid-related staff cutbacks that have engendered resentment among many lower-rung employees against their better paid, more job-secure superiors.

Instead of being banished for a thoughtless utterance, Garrels should be encouraged (even by those who piled on with seemingly unsubstantiated accusations) to reverse his resignation.

I realize this idea is probably a non-starter on both sides. With a five-museum career under his belt, semi-retirement for this sexagenarian is a reasonable option. But if Gary isn’t restrained from walking out the door, the next-best result would be for SFMOMA’s sad loss to become another museum’s fortunate gain.

There must still be some great, unrealized exhibition ideas in the messy pile of folders that I saw on his office’s desk.