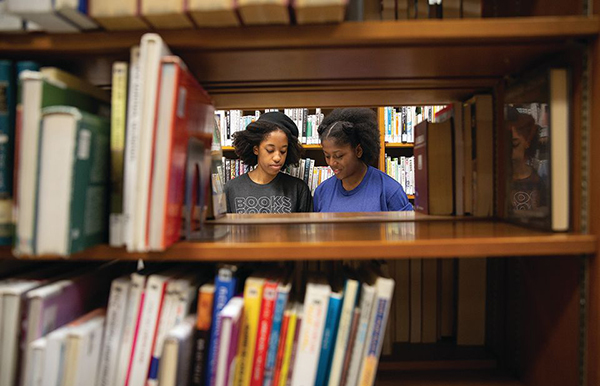 Young visitors at a library in Brooklyn Photo: Gregg Richards; courtesy of the Brooklyn Public Library.

Branches across the boroughs are now hosting museums’ educational programmes

The New York City, Queens and Brooklyn Library systems have brought thousands of visitors to New York cultural institutions through the successful Culture Pass programme, launched last July, which allows patrons to reserve a limited number of free museum tickets online using their library cards. Now, in the initiative’s second phase, which kicked off this month, museums are coming to the library branches with new public programmes.

“We’ve had a phenomenal response really, and it’s been super positive,” Anita Favretto, the associate director of adult programming at the New York Public Library, says of Culture Pass’s first phase, intended to bring visitors who might not have had as easy access as frequent museum-goers to cultural institutions.

For the Cooper Hewitt, Smithsonian Design Museum (the only Smithsonian museum to charge admission, $15 for full-price tickets), Culture Pass is a way “to broaden our audiences and expand to a more inclusive visitor base”, goals for the museum, says Pamela Horn, its director of cross-platform publishing and strategic partnerships. The Cooper Hewitt’s passes are already booked until July.

Institutions can designate part of their offerings to specific zip codes, whether underserved communities, or areas where the museum might have a particular resonance. The Rubin Museum of Art, for instance, which specialises in works from the Himalayas, has areas “with significant Himalayan communities such as Jackson Heights and Flushing in Queens” among its targeted zip codes, a spokeswoman says. “We’ve seen a high pick up rate there.” Meanwhile, at the Morgan Library & Museum, between 16 July and 15 April, 101 of the 500 “targeted offer” passes have been reserved, compared with 494 of the 500 “general offer” passes, according to a museum spokeswoman.

The number of overall monthly passes offered by Culture Pass has grown nearly 40% since its launch. Institutions like the Museum of Modern Art (MoMA) and the Guggenheim Museum quickly raised their monthly quota of passes due to demand, and eleven museums, including the New Museum and Asia Society, have since joined the programme. A Culture Pass spokeswoman says 54,463 passes, providing 133,857 free museum entries, had been reserved as of last month (Depending on the institution’s policies, up to four people can be admitted per pass.)

In the second phase of Culture Pass, launched earlier this month, the New York, Brooklyn and Queens libraries are staging programmes geared towards young participants in partnership with cultural organisations “aimed at bringing some of their public programmes into our branches, as another approach to audience development”, Favretto says. What makes the programmes different from the myriad other library accessibility initiatives is the direct link to the cultural organisations.

Scheduled through June so far, the New York Public Library aims to offer over 50 programmes through its partnerships with a dozen cultural institutions and museums. These include hands-on art classes, lectures and language classes for children. “DrawNow!” the Drawing Center’s “drawing games” programme, references work by artists such as William Anastasi and Sol Lewitt. The Museum of Arts and Design is teaming up with the New York Public Library to present “Denim Demolition”, a program for that will explore the history of jean design and give a hands-on denim workshop. “Treasures from The Frick Collection” gives a virtual tour of the museum, and a history of its inaugural collection, amassed by the industrialist Henry Clay Frick.

A spokeswoman at the Morgan Library & Museum says the institution plans to bring its “Colors of the World” programme, which looks at the history of manuscript illumination and allows participants to re-enact the skills and techniques of this art form, to seven library branches in Manhattan and Brooklyn.

The Morgan, the Frick Collection and the Cooper Hewitt are in the works to bring programmes to branches in the Bronx and Staten Island, Favretto says.