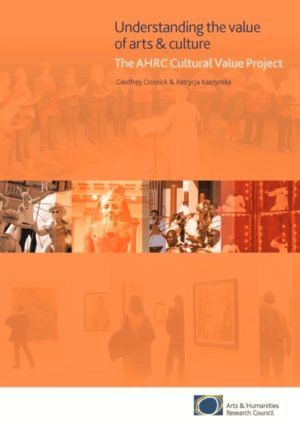 The Arts and Humanities Research Council has published its detailed report on cultural value, the result of a three year project it describes as ‘one of the most in-depth attempts yet made to understand the value of the arts and culture – the difference that they make to individuals and to society’. 70 new pieces of work made up the report, from new research to critical reviews and workshops. At its heart the study aims to discover the components of cultural value and then look for robust mechanisms which demonstrate it. The report explores how culture:

The report also examines arguments which justify arts funding on the grounds of economic benefit, and states that some datasets don’t stand up to scrutiny. Instead it calls for more research into the way the creative industries and funded cultural sector feed each other, and demonstrates that both of these manifestations of culture are a single ecosystem and should not be separate policy decisions. The report also asks questions about which cultural interventions have the most impact – for example the possibility that small-scale arts work in cities has a greater impact on people’s lives than major regeneration schemes.  AHRC, Arts Professional