September 4th, 2021 | Browse other: News. | Tagged with: Museums Are Spending Millions to Protect Their Art as Sea Levels Rise, report from the U.N.’s Intergovernmental Panel on Climate Change | 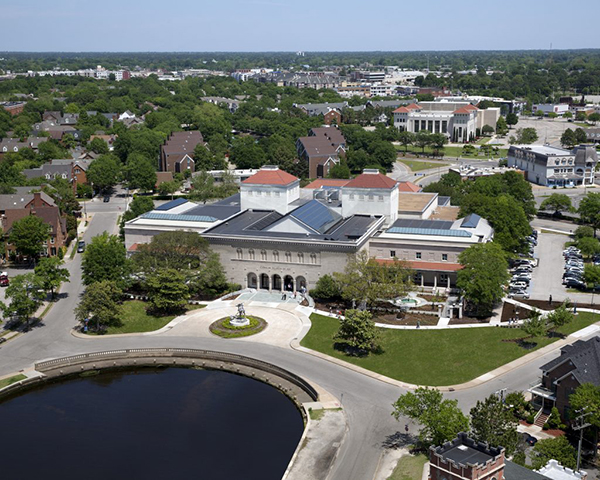 The Chrysler Museum of Art in Norfolk, Virginia, sits nearby the Elizabeth River.

It isn’t only museums near coastlines that are at risk.

Released during a summer of catastrophic wildfires and floods, the latest report from the U.N.’s Intergovernmental Panel on Climate Change (IPCC), which was published in early August, paints a grim picture.

Sea level rise threatens entire island nations. Deadly floods will get worse. The U.N. Secretary-General, António Guterres, called the report a “code red for humanity.” The IPCC report says things will only worsen in the coming decades, even if CO2 emissions are eliminated now.

Museums, just like other institutions, are now facing existential challenges.

Data from the Institute of Museum and Library Services shows that more than one-third of U.S. museums and related organizations are within 60 miles of a coastline; a quarter of those sit near highly vulnerable coasts. The museum-rich city of Washington, D.C. experiences up to 200 coastal flooding events annually. Norfolk, Virginia, 200 miles south and home to the Chrysler Museum of Art, could be one of the first U.S. cities lost to sea-level rise. All this is to say nothing of museums in inland flood zones.

“The problem is very urgent,” said Sarah Sutton of the nonprofit Environment and Culture Partners, which advises institutions on sustainability issues. “And not addressing it is negligent.” 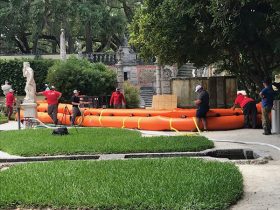 An orange “Tiger Dam” at the Vizcaya Museum and Gardens in Miami can fill up with water in case of flooding.

Throw Money at the Problem

Some institutions have already been hit by the tide: When Katrina’s 30-foot storm surge hit Biloxi, Mississippi, in 2005, a casino barge landed on the Ohr-O’Keefe Museum’s $45 million Frank Gehry campus mid-construction, wrecking two years of work.

“It’s the worst thing that ever happened to us and the best thing,” Whitney director Adam Weinberg told the New York Times, because it spurred the museum to plan defensively for rising waters.

To secure the river-facing loading dock, the design team recruited Walz & Krenzer, a firm that manufactures watertight doors for the Navy, to build floodgates with a 10-inch-thick aluminum plate. Among other measures, the museum also quadrupled the size of its planned 1,000-gallon emergency diesel tank.

To pay for it all, the board upped the capital campaign by some $40 million.

The Pérez Art Museum in Miami didn’t wait for another storm to harden its defenses; the city is among the most vulnerable to hurricane landfall. In 2013, when its $131 million Herzog & de Meuron fortress opened on the Atlantic shoreline, it featured the largest-ever hurricane-resistant panes for a museum and a hurricane-resistant platform. Even its hanging gardens can stand up to Category 5 storms. 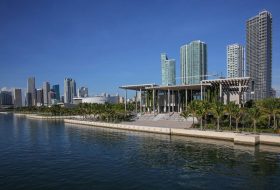 Even smaller, scrappier museums have had to invest big money into weather protections.

Not five miles south of the Pérez is the Vizcaya Museum and Gardens, built a century ago, when global warming was practically inconceivable. To protect the basement cafe and gift shop, for example, the museum is now in the process of installing submarine doors ($455,000 to date) and aquarium glass. In the case of severe weather, staffers can also deploy giant orange tubes, known as the Tiger Dam (which cost $309,040), that fill up with water and serve the same function as sandbags.

None of this was on the mind of Remko Jansonius, deputy director for collections and curatorial affairs, when he joined the institution 15 years ago. Now, he and his colleagues share their research in conferences such as Keeping History Above Water. Even he didn’t have the heart to read the IPCC report.

“Fatigue sets in,” he said. All the same, there are heartening moments, like when more than 500 Miamians with buckets pitched in on post-Irma cleanup. “That was really moving.”

Not only coastal museums are endangered. Sacramento, California, is America’s most flood-prone city. More than 1,100 miles of levees protect the region, which sits at the meeting of the American and Sacramento Rivers.

“I’ve thought a lot about how you mitigate that risk,” said Lial Jones, director of the Crocker Art Museum. “We moved our collections to the second and third floor. Our storage is on the second floor, and our primary galleries on the third. We have offsite storage that is not in a flood zone.”

The Crocker has also worked to reduce its energy consumption with measures like heat-reflecting roofing. But sometimes, it’s the expectations that have to change.

Jones said she was trained to think that artworks in museums shouldn’t be hit by temperature changes of more than three degrees in a 30-day period, and that humidity levels shouldn’t vary more than one percent.

Yet that has become far too expensive to maintain, she said, adding that for centuries before modern climate control, artworks survived.

Elsewhere, some museums are already coming underwater even without storms. 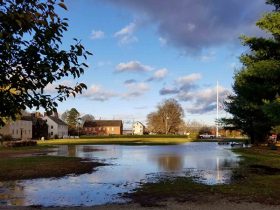 Flooding is a problem at the Strawbery Banke Museum in Portsmouth, New Hampshire, even when weather conditions are favorable.

The Strawbery Banke Museum, in Portsmouth, New Hampshire—a 10-acre site with historic buildings and gardens in a waterfront neighborhood established in the 1630s—has seen 16 inches of saltwater drain into some of its buildings during high tide, even on a beautiful day. That water is now dissolving some of the buildings’ centuries-old bricks.

“We’ve been seeing rapid decay in a number of the buildings since the early ’80s,” said Rodney Rowland, director of special projects and facilities. A capital campaign aims to raise half a million dollars to put protections in place, including potentially finding ways to store water at high tide and then pump it back out afterward. But it’s too late for some parts of the historic houses.

“We’re going to lose some history,” he said. “We already have. The question is how much we have to lose to save the rest.”

Erik Neil, director of Norfolk’s Chrysler Museum, is also looking at big solutions. The institution’s master plan includes raising the streets around the museum and elevating its glass studio by nine feet. He also hopes to buy adjacent properties to provide run-off space.

“It does keep you awake at night,” he said. “I worry that it’s going to take a disaster in some museum for this to be really recognized and move the dialogue.”