You are here: Home » Articles filed under: 'News' » Article: 'Darren Steinberg resigns from MAAS Board'

Darren Steinberg resigns from MAAS Board

December 12th, 2019 | Browse other: News. | Tagged with: Darren Steinberg leaves board of the Powerhouse Museum, Power play on museum's board | 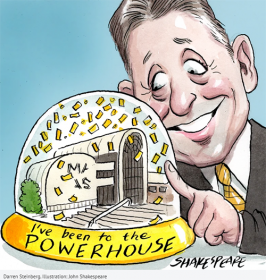 Darren Steinberg’s appointment to the board of the Powerhouse Museum three days before Christmas last year was followed almost immediately by assurances that any potential for conflict of interest with his day job as chief executive at property giant Dexus would be well managed.

So it was with some surprise that this column confirmed Steinberg had actually left the high-powered board, led by Western Sydney University vice-chancellor Barney Glover, back in August. He’d completed just seven months of a two-year stint. This curio remained undisclosed until now.

The Powerhouse Museum — officially the Museum of Applied Arts & Sciences — is in the midst of a well-publicised move to Parramatta, a relocation cynics suggest will result in the government making a motza by flogging the institution’s Ultimo home to developers.

Documents tabled at Macquarie Street last year show the Ultimo HQ would make way for a small museum outpost, while the rest will be converted to office space and apartments. So does Steinberg’s departure have anything to do with Dexus’ designs on the site?

It’s been a busy year for the country’s largest office landlord, having in March snared the 50 per cent of the MLC Centre it didn’t own from GPT Group in an $800 million deal. But he wouldn’t have resigned because of the onerous meeting schedule over at the Powerhouse. Directors met just twice between January and July this year.

“Darren resigned due to a possible conflict that may arise with the potential sale of the Powerhouse site,” a Dexus spokesman told this column on Wednesday.