Seventy-four years ago, as Darwin reeled from the largest single attack mounted on Australian soil, a wave of fear about an imminent invasion by Japanese forces swept the Top End. 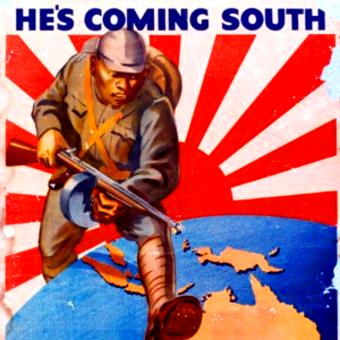 The Australian War Memorial also holds WWII propaganda in its collection, including this Australian poster referring to the threat of Japanese invasion.

But away from the bombings and battlefields of World War II, another sort of battle was taking place over people’s hearts, minds and morale.

“One saying that gets used a lot is ‘the first casualty of war is truth’,” Jared Archibald, curator of history at the Museum and Art Gallery of the Northern Territory (MAGNT), told 105.7 ABC Darwin.

“That’s very much what propaganda is about.”

Displayed for the anniversary of the bombing of Darwin, Mr Archibald’s latest curation includes 10 images unearthed from the museum’s archives showing both sides of the Japanese-Australian wartime conflict.