You are here: Home » Articles filed under: 'News' » Article: 'Darwin’s greatest regret – on his deathbed'

Darwin’s greatest regret – on his deathbed

December 10th, 2021 | Browse other: News. | Tagged with: Darwin’s Greatest Regret and His Deathbed Reflection on What Makes Life Worth Living | 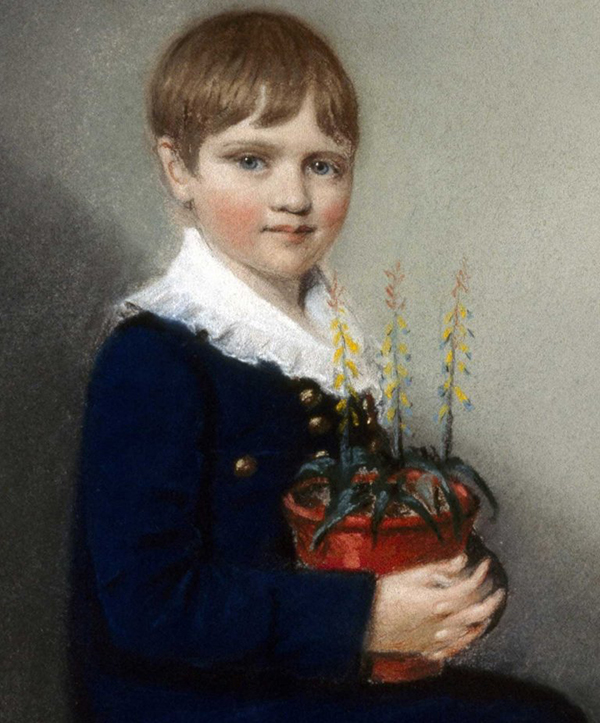 Maria Popova, Darwin’s Greatest Regret and His Deathbed Reflection on What Makes Life Worth Living, The Marginalian, 28 November 2021

“If I had to live my life again, I would have made a rule to read some poetry and listen to some music at least once every week.”

A century before an encyclopedia titled Natural Wonders Every Child Should Know fell into Alan Turing’s child-hands and seeded the ideas that bloomed into the computing revolution, an encyclopedia titled Wonders of the World fell into the child-hands of Charles Darwin (February 12, 1809–April 19, 1882), seeding in him the passion for travel to remote wonderlands of nature that took him aboard the Beagle to make the observations that ultimately came abloom in his evolutionary revolution.

Darwin grew up in the Golden Age of the great nature-poets — the days of Wordsworth’s proclamation that “poetry is the breath and finer spirit of all knowledge… impassioned expression which is in the countenance of all Science” — and so the boy’s passion for the science of nature came coupled with a passion for its splendor, channeled in the poetic and aesthetic enchantments of the human arts.

Between lessons on Euclid, the teenage Darwin sat for hours reading poetry: Wordsworth, Coleridge, Shelley, Byron, Shakespeare, Milton. Later, when he could only carry a single book on his voyages, he carried Paradise Lost. 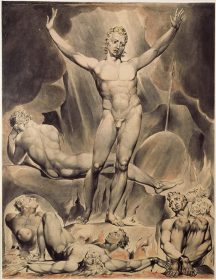 Art by William Blake for a rare 1808 edition of Milton’s Paradise Lost.

At twenty, after traveling to a “music meeting” in Birmingham, Darwin wrote to his cousin: “[It] was the most glorious thing I ever experienced.” His love of music grew so intense that, as he began formulating his ideas about evolutionary descent, he timed his thinking-walks to hear the choir at Kings College Chapel. “It gave me intense pleasure, so that my backbone would sometimes shiver,” he recalled in his old age, baffled that music could move him so deeply despite his own exceptionally bad ear for pitch. (Here Darwin falls victim to his time and training, looking for a physiological explanation before the birth of psychology and neuroscience, before we understood how music moves us not by sense-organ mechanics but by the lever of feeling — that supreme interpretive art of higher consciousness, so that “matter delights in music, and became Bach.”)

This feeling-tone of the beautiful, this delight in the native poetry and musicality of aliveness, accompanied Darwin as he dove deeper and deeper into science to emerge with nothing less than a new world order of understanding the natural world and our place in it. In the last months of finalizing On the Origin of Species, the forty-nine-year-old Darwin wrote in an ecstatic letter to his wife and great love, Emma:

I strolled a little beyond the glade for an hour and a half… the fresh yet dark green of the grand old Scotch firs, the brown of the catkins of the old birches, with their white stems, and a fringe of distant green from the larches, made an excessively pretty view… a chorus of birds singing around me, and squirrels running up the trees, and some woodpeckers laughing… it was as pleasant and rural a scene as ever I saw and did not care one penny how the beasts or birds had been formed. 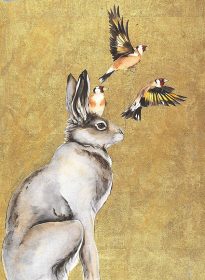 Art by Jackie Morris from The Lost Words by Robert Macfarlane — a twenty-first-century act of poetic resistance to the erasure of nature from the human repertoire of ecstatic imagination.

When the Beagle took him to Brazil in his mid-twenties, Darwin gasped in his journal as he beheld the grandeur of the rainforest:

It is not possible to give an adequate idea of the higher feelings of wonder, admiration, and devotion, which fill and elevate the mind.

These “higher feelings” shaped his notion of divinity — he observed that the devotional experience people cite as their proof of God is based on the same “sense of sublimity” that nature’s grandeur stirs in the spirit, the same “powerful though vague and similar feelings excited by music.” (Two centuries later, the poet and naturalist Diane Ackerman would echo and harmonize this idea in her lovely notion of the Earth ecstatic as a personal religion.)

But then, as Darwin grew old, something happened — something he himself struggled to understand, something that caused him great sorrow: This radiant delight in aliveness through the transcendent experience of beauty — be it in spring’s symphony of songbirds or in a Bach sonata, in a Whitman poem or in the slant of sunlight on a centuries-old oak — grew dim, then was altogether extinguished. Darwin found himself mentally alert and active, but blind, deaf, dead to the life of feeling with which beauty inspirits us. 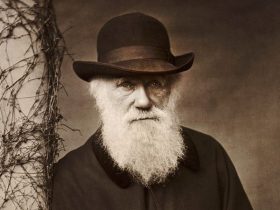 In his final years, Darwin set aside an hour each afternoon to reflect on his life and to impart the private cosmogony of meaning he had discovered in his seven decades. In a set of autobiographical sketches he wrote for his children, bearing the heading “Recollections of the Development of My Mind and Character,” he considered what makes us human, what makes us happy, and what makes life worth living. After his death, finding in these notes immense insight and universal value, his children edited and published them as The Autobiography of Charles Darwin (public library).

In one of these recollections, the elderly Darwin writes:

My mind has changed during the last twenty or thirty years… Poetry of many kinds… gave me great pleasure… Pictures gave me considerable, and music very great delight… But now for many years I cannot endure to read a line of poetry…Music generally sets me thinking too energetically on what I have been at work on, instead of giving me pleasure. I retain some taste for fine scenery, but it does not cause me the exquisite delight which it formerly did.

In a sentiment of extraordinary lucidity and humility, and of immense foresight given what we have since learned about the brain, Darwin bends his mind into examining its own inner workings, illuminating the most essential nature of the human animal — a beast of feeling, wired not for brutality but for beauty:

My mind seems to have become a kind of machine for grinding general laws out of large collections of facts, but why this should have caused the atrophy of that part of the brain alone, on which the higher tastes depend, I cannot conceive. A man with a mind more highly organised or better constituted than mine, would not, I suppose, have thus suffered; and if I had to live my life again, I would have made a rule to read some poetry and listen to some music at least once every week; for perhaps the parts of my brain now atrophied would thus have been kept active through use. The loss of these tastes is a loss of happiness, and may possibly be injurious to the intellect, and more probably to the moral character, by enfeebling the emotional part of our nature.

Complement with Mary Shelley, writing in Darwin’s epoch about a twenty-first-century world savaged by a deadly pandemic, on what makes life worth living and Walt Whitman, writing shortly after his paralytic stroke, on how an appetite for nature’s beauty restores vitality, then revisit the story of how Darwin’s greatest loss shaped his view of life.