You are here: Home » Articles filed under: 'News' » Article: 'Daryl Karp on the importance of democracy'

Daryl Karp on the importance of democracy 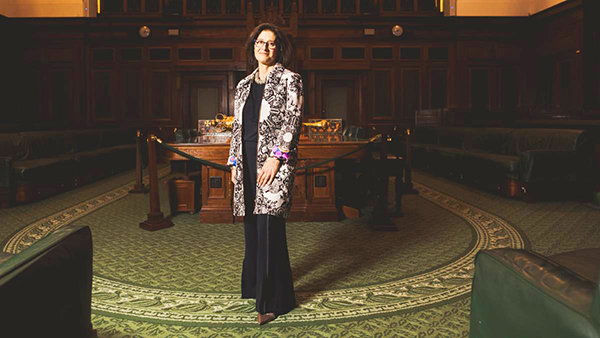 Daryl Karp in the House of Representatives where the full drama of politics was once enacted. It’s now the museum she runs. Photo: Jamila Toderas.

Steve Evans, What democracy means to the head of the Museum of Australian Democracy, The Canberra Times, 8 July 2019

Daryl Karp has democracy running through her veins.

She’s the director of the Museum of Australian Democracy at Old Parliament House and for her, democracy is not just some vague concept. It’s part of her life.

Firstly, she was brought up in apartheid South Africa and secondly she’s Jewish.

On both counts, she realises completely that an absence of democracy is not some small inconvenience but an important matter, even of life and death for millions of people.

Her grandparents on her mother’s side escaped from Nazi Germany, and so from what would become a murderous environment. She remembers a family heir-loom – a large wooden box filled with pre-war German money which had been made worthless by hyper-inflation.

So she does not see the place she runs as some sort of dry and worthy institution but as an important part of Australian life. It generates a passion in her which sparks as she expounds on its importance. She fizzes with enthusiasm.

Her winding route to the top job there was from her native South Africa to Israel and finally to Australia where she worked in television for thirty years, mainly for the ABC. She is on the board of SBS.

She sees similarities between her previous role as a maker of factual programmes and running the museum.

“It’s all about telling stories and museums are no different, she said.

On democracy and the importance of the media, she cites the assertion of the Nazi leader Joseph Goebbels: “If you tell a lie big enough and keep repeating it, people will eventually come to believe it”.

She thinks that resonates ever loudly today.

“I’ve seen a shift in how the public engage with ideas,” she said. She talks of the “importance of fact-based analysis”. She has noticed an increasing disagreement not just about opinions but about what the true facts are.

Australia, she believes, is dropping down the global list of countries with a free media. She thinks it remains a strong democracy but there are worrying signs.

“I think the challenge Australia faces is that democracies evolve and they can fail,” she said.

Australian democracy is strong but “we shouldn’t take it for granted”.

She says that “we have a really strong public broadcaster” and that needs to be protected.

And, closer to home on The Canberra Times, she says “news should be paid for. It’s so valuable, so important. We need to support great newspapers”.

Her worry is that there has been an explosion of information but we are less able to make sense of it – less able to sift fact from falsity and draw sensible conclusions.

Because of this concern about what she sees as the political pressure on newspapers and, particularly, the ABC, she is bringing forward an exhibition about the media to October.

The aim of it will be to engage the public and get people thinking about news. It will, for example, look at how different newspapers treat stories.

The aim of the exhibition will not be to hammer a particular view into the people who visit but to make them think and come to their own conclusions.

She and her parents left apartheid South Africa 40 years ago, she for education in Israel and they for a new life in Australia.

She said her father just couldn’t take the relationship between white people and black people any more. He needed to get out.

And then, after study in Israel, Daryl Karp decided to come to Australia where her parents were.

She has been back to South Africa since and met her black nanny from childhood. “I realised that I didn’t know her surname and it hadn’t occurred to me to find out.”

So here they all are in Australia, she and her parents. It is a family which gets together and laughs and disputes around the dinner table on a Friday night in what she calls a “rich, robust, rollicking, political, intellectual, argumentative, joyous tradition”.

She is delighted with her working life at the museum. “I feel that everything I’ve ever done has led me to it.

“I’ve loved it and I think I’ve brought about substantial change.”

There has been criticism. Some politicians feel the museum should focus more on parliamentary politics.

A parliamentary report, titled Telling Australia’s story – and why it’s important, said that the museum should “focus on developing visitors’ understanding of the nation’s democratic history, and inspiring their faith in our democracy”.

She hit back, calling the conclusions “curious” and “strange”.

Daryl Karp takes a broad view of what democracy means. It’s not just about what happens in parliament and elections. For her, it’s also about wider society – about journalism and debate among ordinary people. It’s about engaging citizens so we take an interest in issues. In her view, democracy doesn’t just happen at elections.

She is happy promoting democracy. “It’s the best job I’ve ever done.”