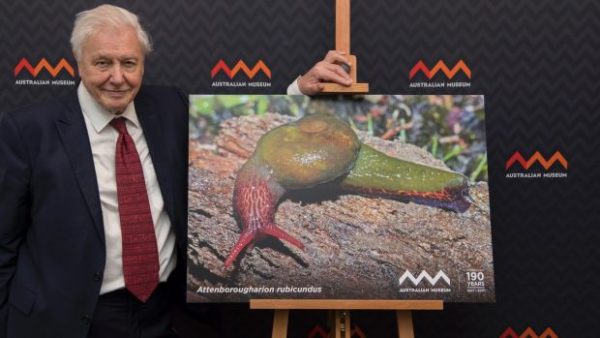 David Attenborough with a photo of the Tasmanian snail named in his honour at the Australian Museum. Photo: James Morgan.

His name has been used to classify a beautiful dragonfly, an extinct marsupial lion, a ghost shrimp from Madagascar and a carnivorous pitcher plant.

Now a Tasmanian snail has the honour of being named after the world’s most famous naturalist, David Attenborough.

To mark the beginning of its 190th anniversary year, the Australian Museum has named Attenborough as a lifetime patron – and a little Tasmanian snail shall for evermore be known as Attenborougharion rubicundus.

Attenborough was at the museum on Wednesday for a lunch in his honour.

He said he was deeply honoured to be made a lifetime patron by Australia’s first museum.

“The Australian Museum, when it was founded 190 years ago, had the extraordinary and unique responsibility of starting the first systematic collection of the animals and plants of an entire continent,” he said.

“Today it is a scientific centre of world importance and it is a great honour to be made one of its lifetime patrons.”

In presenting the award, the Australian Museum Trust president, Catherine Livingstone, said Attenborough’s contribution to generating awareness of the natural world was unprecedented.