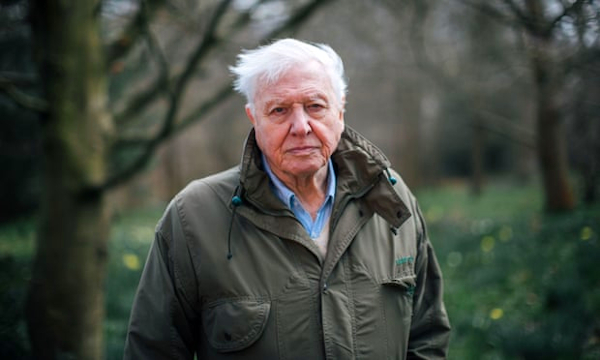 David Attenborough says the Coalition government led by Scot Morrison had adopted an attitude of ‘we don’t give a damn what [burning coal] does to the rest of the world’. Photograph: Polly Alderton/BBC/Polly Alderton.

David Attenborough has criticised the Morrison government’s record on climate policy and support for new coalmines.

In an interview that will air on Triple J’s Hack on Tuesday, the celebrated broadcaster and natural historian also said visiting coral reefs, such as the Great Barrier Reef, that have bleached due to warming oceans is “a tragic sight”.

Attenborough told the program that previous Australian governments had been “saying all the right things” on climate policy but this had changed.

“You are the keepers of an extraordinary section of the surface of this planet, including the Barrier Reef, and what you say, what you do, really, really matters.

“And when you’ve been upstanding and talking about what I see as the truth and and you suddenly say, ‘No it doesn’t matter … it doesn’t matter how much coal we burn … we don’t give a damn what it does to the rest of the world.”

Attenborough also criticised then treasurer Scott Morrison for bringing a lump of coal to question time in 2017. View video – Scott Morrison brings a chunk of coal into parliament.

The conservationist said politicians are capable of building support for stronger action on the climate crisis by appealing “to what people think is right”.

“Do you think it’s right that we go on destroying the natural world?” he said.

He also said there was an economic advantage in taking more urgent action on global heating because businesses and the finance sector will be exposed to greater financial risk if the world doesn’t move quickly enough.

In July this year, Attenborough told a UK parliamentary committee that the Great Barrier Reef was the starkest example of climate change’s impact that he had seen.

He also told the parliament that Australia was an “extraordinary” example of a country where climate deniers remained in parliament despite the country facing some of the worst effects of global heating.

In the interview with Hack, Attenborough said “a bleached reef is a tragic sight”.

“A desperately tragic sight, particularly if you’ve seen it before, and you know what it could have been like.”

The full interview is on Hack on Tuesday from 5.30pm and the ABC’s 7.30 program.

"It's their world": Sir David Attenborough praises young people protesting for climate change, and slams Scott Morrison for bringing a lump of coal into Parliament in 2017.