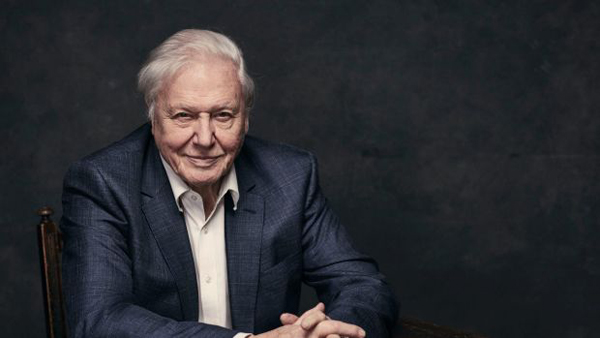 There is only one response when you tell people you are going to meet Sir David Attenborough. “Oh, my god,” says everyone from colleagues to the barista who makes my morning coffee. “I love him.”

What is it about Attenborough? What does he make of all this affection from people who have never met him? “Makes you feel bogus,” he says in that distinctive throaty rumble. “I mean, it’s totally fiction. Or totally unrealistic, to put it better. Because that’s not me – that’s only one tiny part of me, by which I happen to earn my living. But it’s not me. It’s false … I’m not different from anybody else.”

After 60 years chatting affably about animals in people’s living rooms, it’s probably inevitable that he’s become a surrogate granddad for millions of strangers. He understands this. “If you are a child of three or four, and you see this funny little figure on the television set and, what’s more, it remains there, more or less the same – not exactly but more or less – for all those years, it occupies a different space in your mind,” he says. “Not only that, but it’s associated with all the lovely things that you can think of – all the wonders of the natural world.”

Attenborough knows how television works. He understands what makes audiences tick – perhaps even better than he understands the mating habits of pygmy three-toed sloths or the hibernation patterns of bears.

When he started at the BBC, the television landscape was as unfamiliar as the jungles and deserts he would later explore on screen. He was 24 years old. He had once watched a television at his wife Jane’s parents’ house, but didn’t own a set himself. At that point, not many people did.

But he was bored by his job editing science textbooks. He had hoped his degree in natural sciences from Cambridge might eventually take him to exotic locations on research trips, but most zoologists at that time spent their working lives in labs. So instead of ditching publishing to return to university and read for a doctorate, he applied for a job with BBC radio. He didn’t get it. But then came a phone call from Mary Adams, a producer with the BBC’s television service. Would he be interested in joining their training program?

Attenborough has written about those early years in his memoir, Life on Air. He and his colleagues were inventing the visual language of television as they went along. In the cafeteria they debated the best way to change shots – by cut or dissolve? “Should we perhaps restrict the use of the dissolve and so establish a special meaning to it – to suggest, maybe, a change of time, subject or location. When could we justifiably use music? Was it dishonest to mix film sequences shot earlier with live action?”

Even now that his age sometimes prevents him from researching and presenting documentaries in the field, Attenborough is still working on scripts. He reviewed – and in some cases rewrote – the voiceovers he recorded for his new nature series Planet Earth II.