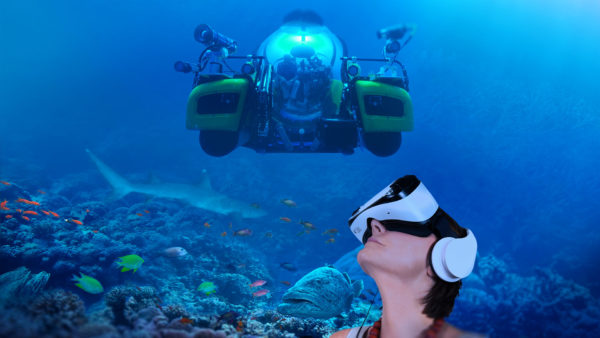 Virtual reality technology gives visitors at the National Museum of Australia the chance to dive deeper into the works of nature filmmaker Sir David Attenborough, with some urged to take sick bags on their tour.

Virtual reality (VR) technology is being used to give visitors at the National Museum of Australia the chance to dive deeper into the documentary works of Sir David Attenborough than ever before.

From today, the museum is offering two experiences narrated by Sir David, made specifically for VR technology.

One looks back to the origins of life on Earth, while the other explores the Great Barrier Reef.

Sir David has previously made more conventional documentaries on each of the two topics.

At the National Museum, visitors are each provided with a headset, which completely isolates them from the rest of the theatre.

Sick bags are also made available for those prone to motion sickness.

“For some people it’s like being on a boat or riding in a car on a long journey, so better to be prepared,” Ruth Wilson from the National Museum said.

The maiden screening proved a hit with attendees, who praised its immersive qualities.

“I feel a bit exhausted by it; it was quite demanding,” one said.

“It was really amazing, at some points you could look up and see the surface of the sea and look down and see the bottom,” said another.

Ms Wilson said the museum was eager to expand its involvement in VR exhibitions in coming years.

“VR is an emerging technology … some of the newer technology comes with a console so you actually help drive the experience, so it’s a bit more like a PlayStation or an Xbox kind of experience,” she said.

“Museums and galleries generally have got a role to play in the development of content for virtual reality, and that’s something that the National Museum’s certainly very interested in.

“We’ll run right through 2017, and we will change up the content as the year goes by.”

The David Attenborough VR experiences have previously run at the Australian Museum in Sydney, and the Natural History Museum in London.