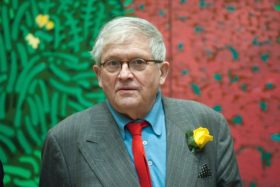 The British artist David Hockney is swapping canvas for glass with a new commission from Westminster Abbey. Hockney will design a stained-glass window honouring the reign of Queen Elizabeth II, the longest ruling monarch in British history. The window in the north transept, which is 1.8 metres wide and six metres high, will be known as The Queen’s Window.

The 79-year-old British artist, who turned down a knighthood in 1990 before receiving the exclusive Order of Merit in 2012, was commissioned after visiting the abbey this summer says a spokeswoman for Westminster Abbey. “It will be wonderful to have in the Abbey the work of this internationally renowned contemporary British artist,” says the Dean of Westminster, the Very Reverend Dr John Hall, who suggested Hockney for the commission.

Hockney will have free reign to design the window although the work will be guided and approved by the abbey. Although the design is still in process, Hockney says that he has “planned a landscape full of blossom that’s a celebration every year.”