You are here: Home » Articles filed under: 'News' » Article: 'David Rathman AM PSM new Ambassador for' 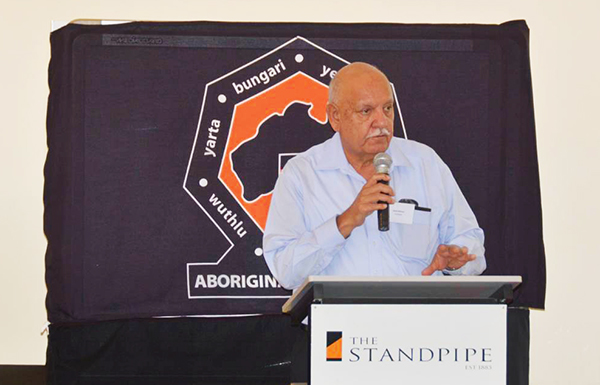 A great leader and advocate for South Australia’s Aboriginal communities has been appointed as ambassador for the Aboriginal Art and Cultures Centre (AACC), now in development for the Lot Fourteen global innovation precinct in Adelaide.

South Australian Premier, Steven Marshall says the appointment of David Rathman, AM, to the role is a significant step in the centre’s development and will strengthen the participation of Aboriginal communities in its planning and implementation. “The AACC will position South Australia as the gateway to the oldest living cultures in the world by offering extraordinary immersive experiences, combining traditional storytelling with modern technology to create a global tourism attraction,” Premier Marshall said.

“David Rathman will be an outstanding advocate for the AACC, drawing on his knowledge of Aboriginal cultures and his experience working with and for Aboriginal communities across culture and history, education, health, and community welfare.”

Mr Rathman was born and raised in Port Augusta and is a proud Eastern Aranda descendant with family connections to the Kokatha, Arabunna and other Aboriginal nations in South Australia.

He says he is excited to help bring the timeless stories of Indigenous cultures to the world at the AACC. “We will help people to gain an appreciation of Aboriginal connection to Country, and their own connection, in terms of a cultural and spiritual journey over 60,000 years. When people walk into our centre, the Aboriginal experience will walk forward and embrace them. We want people to feel part of their journey too and to come back many times over and bring their future generations”.

Mr Rathman said as AACC Ambassador, he would make sure that Aboriginal people continued to be represented at all points of the centre’s development and operation. “This is a fantastic opportunity for Aboriginal people to have ownership and leadership of what will become one of the state’s leading tourism attractions and to be active participants in that venture through business and career opportunities. There is a lot of excitement for this centre.”

Last November, I met David Rathman for this story: https://news.aboriginalartdirectory.com/2019/11/australias-crown-jewels.php

He had made his community’s views clear in the Lowitja O’Donaghue Address for the Don Dunstan Foundation in May. “South Australian Aboriginal institutions decided to constructively support the Premier’s vision for AACC as a place devoted to Australian Aboriginal cultures, truth-telling, art, history, science and contemporary life. An Aboriginal presence on Lot 14 will shine a light on the past, demonstrate how we can work together now and forge a path to a future which reflects the true story of Country”.

Only this week, yet another contender for a First Nations Cultural Institution was thrown into the pot by Prof. Mark Kenny – former political correspondent, now an ANU academic. His idea is that Canberra should join the conga line headed by Adelaide and already followed by Alice Springs and Perth. His justification:

“Aboriginal Australia has waited long enough for this material recognition,” he said. “Failure to recognise Indigenous peoples in laws, culture and history had made the nation emotionally blocked and unable to face its past”.