You are here: Home » Articles filed under: 'News' » Article: 'DCMS on museums education on Britain’s past'

DCMS on museums education on Britain’s past 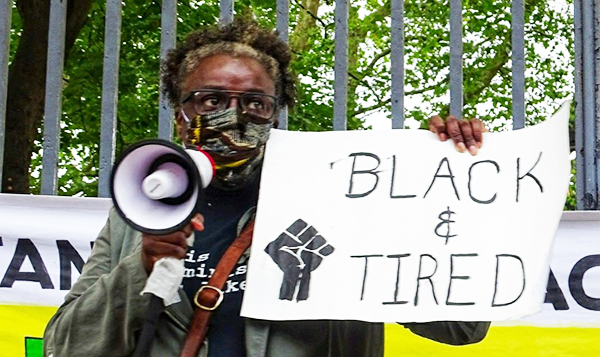 A protester calls for the removal of the Geffrye statue outside the Museum of the Home last month. Photo: Dean Ryan.

The Museum of the Home in Hackney says the public response to the announcement that it would not remove a statue of slave trade beneficiary Robert Geffrye has made the museum’s board “reflect further” on its decision.

The museum has been subject to ongoing protests since announcing in July that it would “reinterpret and recontextualise” the statue rather than taking it down, in spite of a public consultation that showed a majority of the north-east London borough’s residents were in favour of its removal.

However, in a statement to Museums Journal, the museum said: “Since we announced the board’s decision not to remove the statue, the response has made the board reflect further. They are considering the responses and discussing the decision with community and creative partners.”

The statement comes after a report in the Huffington Post last week indicated that the museum, which receives grant-in-aid from the Department for Digital, Culture, Media and Sport (DCMS), may have come under pressure from government to leave the statue in place.

Emails obtained by the newspaper show that, prior to the board’s decision, the museum’s director Sonia Solicari had expressed concern that the government’s stance on contested statues would put the museum in a difficult position.

An email sent by Solicari to DCMS on 18 June said: “This might place us in an extremely compromised position if the public consultation suggests overwhelmingly that we take the statue down – early indications are that it will!”

Solicari also asked for clarification on whether a letter she had received from the government about the statue would “take decision-making powers away from the board or will it just be a recommendation?”.

She added: “It’s a really traumatic time for us – appearing on sites like ‘topple the racists’ and 38 degrees [the online petition site].”

Weeks later, on 29 July – the same day that the board announced its decision on the statue – the museum received an email from culture secretary Oliver Dowden stating: “I am aware that the issues of contested heritage provoke strongly held views, and that right now these issues will be in the forefront of your minds. I therefore wanted to share with you the government’s position on these issues.

“The government believes that it is always legitimate to examine and debate Britain’s history, but that removing statues, artwork and other historical objects is not the right approach.

“Confronting our past may be difficult at times but, as the prime minister has stated, we cannot pretend to have a different history. Historical objects were created by previous generations, who often had different perspectives and different understandings of right and wrong.”

The letter added: “As a government-funded organisation, I would expect you to be mindful of the above approach, which has been agreed with Historic England. If you plan to make any statements or actions in relation to this issue, please contact DCMS in advance of doing so.”

Hackney Stand up to Racism, the group that has been organising protests at the museum against the statue, expressed its “disgust” at the Huffington report.  The group said: “We abhor the financial blackmail that was spelt out in Dowden’s message to the museum management, as revealed by the Huffington Post.

“We reaffirm our condemnation of the museum’s directorate in riding roughshod over the wishes of Hackney’s citizens – expressed in a consultation initiated by the museum itself – that the statue must come down.”

DCMS said in a statement: “Whilst it is always legitimate to examine Britain’s history, removing statues, artwork and other historical objects is not the right approach. Instead, we should aim to use heritage to educate people about all aspects of Britain’s complex past, both good and bad.

“Publicly funded museums must not remove statues that form part of a listed building or other heritage objects in their care for political or campaigning purposes. They must be seen to be acting impartially, in line with their publicly funded status.”

The Museum of the Home is due to reopen this month following an £18m redevelopment. It announced last year that it was dropping Geffrye’s name from its title.