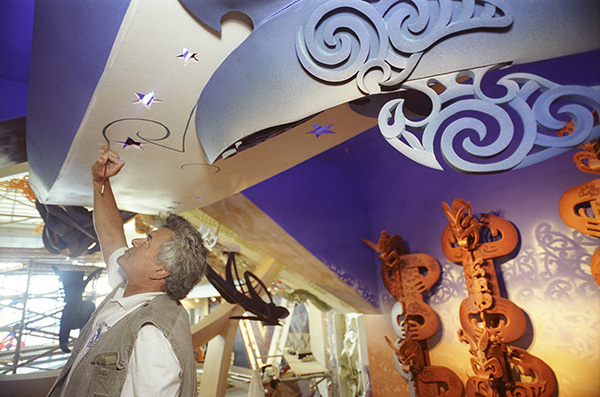 Sustainable indigenised practice in colonial museum models – is there such a thing? Kaihāpai Mātauranga Māori | Head of Mātauranga Māori. Puawai Cairns explores the question in this adaptation of a speech given at the International Centre for the Study of the Preservation and Restoration of Cultural Property in Rome, 31 Oct 2019.

I am always searching for better ways for the museum that I work in, to work harder and better for the Māori communities that surround us, reflecting on my own experiences working as a Māori curator, curatorial manager and as a trustee for museums across Aotearoa New Zealand.

Working in museums as an indigenous person is no easy feat. It is taxing, your triumphs can feel bittersweet. For every win that you may be able to get from a system that is not set up for you, there are numerous deferrals, declines, and dismissals. But you persist because you know your purpose, individual or collective. My purpose is to create a sustainable environment for the team I manage and the teams who support us, in order for mātauranga Māori – Māori knowledge and knowledge systems – to flourish inside and outside the museum.

Within that statement are a number of things to consider. What is a sustainable environment? What are the unique features of our specific museological practice? What does flourishing look like?

In asking these questions, I seized on the imagery of growing, blossoming, gardening, imagining the museum as a place of desiccation and, dare I say it, decay. It is my job to enrich and nourish the ground so that my team and our purpose can grow and succeed. To this end, the terms ‘decolonisation’ and ‘indigenisation’ are only a means to a more farsighted horizon, they are not our goal, but present possibly better ways of achieving a different system and environment for indigenous people within heritage institutions.

But let me start properly with indigenisation and decolonisation. I have written a number of blogs (links at the bottom) explaining some of my unease with the notion of decolonisation and the inherent danger for indigenous people in decol, where the coloniser remains at the centre of a process that is supposed to centre the colonised. I have had a long held resentment of the theory of decol because of this, which, as I wrote, placed an expectation on me to modify and change while the colonial system remains the same.

To help me and my team come to grips with this uneasiness, I created a series of talks which I originally called ‘Throwing Fertiliser At Your Feet’, which subsequently became the Fertiliser Talks, where we grappled with ideas like decolonisation and indigenisation.

In one of the first talks, I invited respected Māori scholar Dr Moana Jackson to help us think. The instinct to create the Fertiliser talks was based on a very Māori impulse to wānanga, or to create space for focused discussion. We have a wonderful proverb within Māori culture: “He aha te kai a te rangatira? He kōrero.” What is the food of chiefs, it is speech.

In these talks, we tackled indigenisation and were given a gift by Moana when he said that his preference as a term for indigenisation was reMāorification. We decided to run with this – it was a license to start a conversation about practices in our museum that did not start with the colonial experience: it built through it, beyond it, and in spite of it. ReMāorification was the promise of a created space where we, as the indigenous people, could determine the space, the content, the practice, according to our own autonomy and independence.

So what does Māorification look like in a museum?

It’s good that you ask! Here is a list:

There may be other things that others would argue should also be placed on this list, but I think these are most helpful for this presentation.

‘Engaging with a museum can fill some communities with suspicion’

In short, I aspire to help conditions where Māori aspirations can grow in the museum, to ensure our practices recognise our people, their inherent dignity and the sometimes painful and traumatic processes of reconnection with histories and sacred objects.

Engaging with a museum can fill some communities with suspicion. They are sites where historically not many good things have happened for Māori. But Māorified museology can help build pathways into the museum and portals in to influence its practice.

But what happens when it goes all a bit awry? How do we prevent the indigenisation/Māorification of practices within museums to become a reproduction of the extractive nature of colonisation? What can happen in a museum system that does not sufficiently support a sustainable eco-system for indigenous people?

Decolonising can be colonisation at its most insidious

Across the heritage and museum sector, I have seen Māori people burn out because there aren’t enough of us employed to sustain the ideal practices that come with serving Māori communities, as well as serving the bicultural aspirations of our museums. I have also seen across organisations where Māori are asked to be participants but are not resourced as partners.

There is a phenomenon I have also observed which I’ve nicknamed isolation sickness, where single Māori are brought into teams of non-Māori for specially created positions usually to help with cultural awareness – a panacea for all things culturally ignorant – and they become the person who has to not only become the ‘native Wikipedia’ for that team, and do their own job, but accommodate micro-aggressions, structural racism, and operate in isolation from a wider sense of connected Māori community within the organisation.

It sets Māori up for failure when they are isolated, disconnected, and expected to have superhuman knowledge of their culture on tap. Again, it is that funny thing when a step which may be seen as decolonising mimics colonisation at its most insidious.

Indigenisation can only be successful when there is an equitable distribution of power and resource, when successful indigenisation is just as critical a mission indicator as visitor metrics or sponsorship relationships. ReMāorification (or you could say Māorificiation, as we could argue that museums which weren’t Māori to begin with can’t be reMāorified) is a process of conscious restorative growth, sympathetic to the resources available and mindful of the requirement to ensure these are sustained and nurtured.

Indigenous staff are not an inexhaustible resource

In this time of heroes like Greta Thunberg trying to save us from ourselves, it should not be such a leap to understand that while we grapple with humanity’s horrendous impact on the land and Papatūānuku, our Earth Mother, I can see the same patterns of unfettered consumptive instincts in the some of the notions of decolonising and indigenising in heritage debates.

We have to understand the true costs of these aspirations on those who are expected to service them and respect and nourish their sources, which means caring for indigenous staff. Ensuring they are not alone. Ensuring they are allowed to remain connected to their cultural practices. Understanding that they are not an inexhaustible resource.

And we have to remember we are obliged to protect these emergent practices by indigenous people in museums, as they may be the very thing that ends up keeping museums and heritage organisations alive for the future.

I began exploring the term ‘sovereign space’ a few years ago, dissatisfied with biculturalism and the ongoing centring of the dominant European culture in Aotearoa New Zealand. I was frustrated that the bicultural structure that Te Papa was built on – even though it had opened the door for many more Māori stories than had been seen in museums before – was still facilitated by a very Eurocentric system of ideas.

I wanted to create a term which helped me understand a space of independent thought and sovereignty in museums. In Māori we call this mana motuhake, and in keeping with the alliteration, I coined sovereign space. I wanted a theoretical and actual space that prioritised Māori and our ways of being.

I first raised the idea of sovereign space in a presentation I gave to Goethe-Institut in Jakarta in 2017. In my mind, sovereign spaces are spaces that do not demand resolution – they revel in ambiguity and mess. They are imagined spaces of indefinable creativity and independence.