You are here: Home » Articles filed under: 'News' » Article: 'Decolonise the Museum at ANHM'

Decolonise the Museum at ANHM 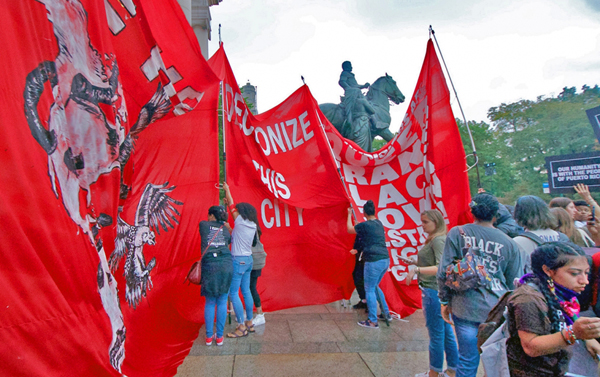 Protesters try to encircle the Roosevelt statue in front of the American Museum of Natural History with red banners (all photos by Hrag Vartanian/Hyperallergic).

Hundreds of people came out to attend a decolonization tour of one of New York’s most popular museums.

The line to get into the American Museum of Natural History (AMNH) stretched all the way around the block yesterday afternoon for Columbus Day — not just because many people had the day off, but also due to the fact that it was the site of Decolonize This Place’s 2nd annual Anti-Columbus Day Tour.

Organizers say they handed out 1,000 flyers to those in attendance and Hyperallergic counted well over 500 people taking part in the tours — there were only 200 attendees last year. A couple dozen tour guides with red armbands led the crowds through over a dozen of the museum’s galleries (there were so many people, the tour had to be cut short), starting with Theodore Roosevelt Memorial Hall and weaving through the Hall of Northwest Coast Indians, the Hall of African Peoples, and the Hall of Pacific Peoples, among others. Along the way, tour guides pointed out egregiously overlooked histories of misidentified artifacts and, much worse, the continuing display of human remains without permission of their descendants.

The tour began with an acknowledgment that the land the museum stands on once belonged to the Lenni Lenape: “Our action today, at its most fundamental level, stands in solidarity with the Lenape, and all Indigenous peoples, whose land was stolen to create the settler states and who continue to live under siege, surveillance, and colonial structural violence on their own occupied land.” This sentence set the tone for the tour, which stopped briefly to acknowledge the plight of Puerto Ricans in the wake of Hurricane Maria: “Let us acknowledge the people of Puerto Rico, a colonial territory of the United States annexed by [Theodore] Roosevelt.”

The action both began and ended with Theodore Roosevelt, a figure honored throughout the museum for his commitment to preserving the natural wonders of the US — at the expense of the country’s native inhabitants. One of the three overarching demands of Decolonize This Place and its supporters is the removal of the Roosevelt statue from the entrance of the museum, where the President rides on a horse, holding his power over racist renditions of a Native American and an African at the horse’s flanks. In a press release for the action, Decolonize This Place wrote that the statue “has often been cited as the most hated monument in New York City.”

The AMNH realizes the Columbus statue is a problem, but in an email to Hyperallergic, the administration took only partial responsibility for its continued existence: “The Museum believes that the statue needs to be addressed and several factors will figure into determining the exact approach. The Museum is conducting its own research and development process, but the decision on how to address the statue is not solely in the Museum’s control. The statue sits on New York City park land and as such is owned and managed by the City. This summer, the City created a commission to review statues and monuments on public land and we expect the Roosevelt statue to be considered in that process.”

The eventual removal of the Roosevelt statue (or at the very least, the removal of the two people of color at its feet) would be a good start, but decolonizing the museum would take much more than just that single action. Protesters last night also called for the city to rename Columbus Day as Indigenous Peoples’ Day (like so many other cities have done) and for the museum to show respect for other people’s ancestors, i.e. repatriating relics and declassifying the racial system of the museum displays.