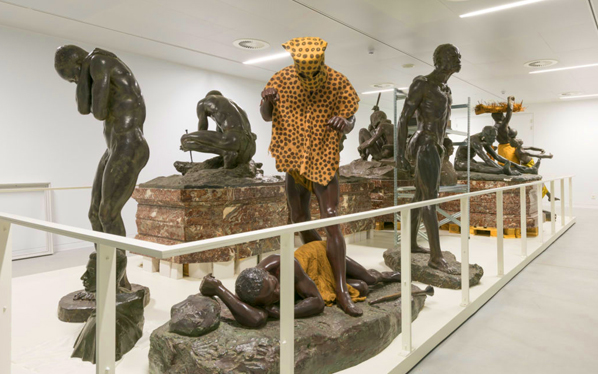 Kate Brown, With a $84 Million Makeover, Belgium’s Africa Museum Is Trying to Appease Critics of the Country’s Colonial Crimes, 8 December 2018

The $84 million restoration includes bringing contemporary African artists into the galleries of the “last colonial museum.”

In 1898, the Belgian king Leopold II built himself an exhibition of war booty that included a human zoo to promote his imperial venture in the Congo Free State. Within the gilded marble halls of what became the Royal Museum of Central Africa—today known as the Africa Museum—the European country propagated its message: “Belgium brings civilization to the Congo.” Meanwhile, Belgium ruthlessly plundered the central African region.

Some 120 years later, much of the original content still stands in homage to Belgium’s former empire. Its director himself admits that it is often branded the “last colonial museum.” But now, the museum has undergone a major renovation to “decolonize” its prestigious but highly controversial collection.

After a staggering $84 million revamp, the Africa Museum has introduced a critical narrative around Belgium’s activities in the Congo, now finally integrating it throughout its halls and also within a new dedicated gallery. Contemporary African artists are being included for the first time in the otherwise classical palatial venue just outside of Brussels in Tervuren.

Recent weeks have proven transformative for the subject of colonial-era collections and postcolonial discourse: a report, commissioned by French president Emmanuel Macron, is calling for all objects taken unjustly from Africa to be returned to their countries of origin, if they ask for them.

On Saturday, Belgian prime minister Charles Michel is supposed to speak at the revamped Africa Museum’s official unveiling. In the background of the opening, Belgium’s government is deeply divided over Michel’s vote to support the U.N.’s pact on international migration. The controversy, which could unseat the prime minister, has further polarized opinions about the museum and the very racialized history it represents.

“It is not normal that 80 percent of African art is currently found in Europe,” director Guido Gryseels tells artnet News over the phone ahead of the opening, saying that he agrees with president Macron’s statement. “Africa obviously has a right to retain control over its own cultural heritage. We are reopening this museum in an incredibly challenging time for European museums, but it is also a really exciting time.”

Until this reboot, the museum had not been changed much since 1958, two years before Congo gained its independence from Belgium. It had only presented a positive view of its colonial legacy. Now, the Africa Museum’s “Long History” gallery will look at colonial activities and document Belgium’s excessive use of violence as colonial power. It also includes archives tracing the tragic postcolonial history that unfolded in Congo, post-independence, as well as in Burundi and Rwanda, which were both also Belgian colonies for a time.

Other updates include a modern glass pavilion welcome center and an underground passageway that expands the museum’s gallery space from around 64,600 square feet to just under 119,000 square feet. Renewed galleries will look at the flora and fauna of central Africa, as well as display significant art and objects from rituals, ceremonies, and music. Its most famous attraction, the “Crocodile Room,” has largely stayed the same.

The museum says it will consider claims for restitution if and when they are officially made. Gryseels says the institution has only ever received one request, and that was in the 1970s when 165 objects were returned only to be stolen a few years later.

This is a cautionary example that Western collections continually recall. In fact, Senegal just opened its own museum of civilizations on Thursday in an effort to void this very argument. Next year in the Congo, a new museum is set to open. The Africa Museum is engaging in partnerships with both, but restitution remains an open question.

In the background, the museum says it will be dedicating more resources to provenance research and to digitizing its collections so that it can hand its archive over to the respective African nations, should they call.

The Africa Museum has also introduced a “living” exhibition that includes works by ten contemporary African artists for the first time in dialogue with its over 120,000 ethnographic objects and other objects.

A memorial wall on the grounds lists the 1,508 Belgians who died in the early colonial period under Leopold’s program. Meanwhile, the hundreds of thousands—some estimate the number goes into the tens of millions—of Congolese who died were until now given no mention.

Responding to this absence, Congo-based artist Freddy Tsimba has created an intervention: His work, Shadows, uses light to project the names of the first seven Congolese victims known to die in Belgium, who perished in the human zoo Leopold II made back in 1987 for the World Expo in Antwerp in 1894, as well as the names of children who died at the Belgian city of Gijzegem’s residential school between 1890 and 1906. Most of the names of the perhaps millions of Congo-based victims remain unknown.

Congo-born, Belgium-based artist Aimé Mpane tells artnet News that he refused the invitation at first. “Being steeped in colonial history, this place seemed to me to be the last venue to exhibit a work of contemporary African art,” Mpane he writes over email. “Then, after much reflection, I understood that it was necessary to mark it with a work that would respond to the painful memories it evokes.”

Mpane’s New Breath, or the Burgeoning Congo stands in the striking main rotunda where Leopold II’s gold statue still stands. The chiseled sculpture by Mpane is a massive profile of an African man’s head on a bronze base. “My sculpture stands in the precise place that the ‘colonizers’ chose to honor King Leopold II and his entire colonization policy. My work is an obvious answer that, from now on, we will have to count on [Africa].”

Gryseels maintains that the Africa Museum is not a modern art museum, but that the contemporary works included in the reopening will likely be permanently installed, though this is not confirmed.

But inevitably, the new bridge between the contemporary and classical worlds is building tension around the hot-button question of restitution. “It is not to be discussed. The stolen works must be returned to Congo,” says Mpane, who says that he is, through his art, becoming more involved. “It is our responsibility to manage our memory.”