You are here: Home » Articles filed under: 'News' » Article: 'Defining moments in history'

‘Its British settlement that has most profoundly shaped the country that we are,’ says prime minister.

Tony Abbott has nominated the arrival of the first fleet, along with the launch of Rupert Murdoch’s Australian newspaper and the publication of The Lucky Country, as defining moments in the nation’s history.

The prime minister marked the 200th anniversary of the death of Arthur Phillip, the first governor of New South Wales, by crediting the arrival of the first fleet from Britain in 1788 as “the moment this continent became part of the modern world”.

Abbott made the remarks on a visit to the National Museum of Australia in Canberra on Friday to launch the Defining Moments in Australian History project.

“Any attempt to nominate defining moments will inevitably be contentious,” Abbott said. “For instance, I hope that the defining moments of World War I might include the capture of Jerusalem and the achievements of General Monash as well as the landing at Gallipoli.

“I hope that the defining moments of 1964, for instance, might include the launch of the Australian newspaper as well as the publication of The Lucky Country.”

Abbott added that he wanted to see the success of a referendum to recognise Indigenous people within the constitution.

“There is a further defining moment that I hope one day will certainly have a plaque here at the National Museum and that’s for the constitutional amendment recognising Aboriginal peoples that I hope will soon take place,” he said.

In the speech on Friday, Abbott said it was fitting that the defining moments project launch coincided with the bicentenary of Phillip’s death.

“It was the moment this continent became part of the modern world. It determined our language, our law and our fundamental values. Yes, it did dispossess and for a long time marginalise Indigenous people.

“As Noel Pearson frequently reminds us, modern Australia has an important Indigenous and multicultural character. Still it’s British settlement that has most profoundly shaped the country that we are.

“It has provided the foundation for Australia to become one of the freest, fairest and most prosperous societies on the face of the earth. So Arthur Phillip is as significant to modern Australia as George Washington is to the modern United States.

“On 26 January 1788 Governor Phillip raised the union flag at Sydney cove, drank to the king’s health and success to the settlement – I quote from the official record – ‘with all that display of form which on such occasions is esteemed propitious because it enlivens the spirits and fills the imagination with pleasing presages.’

“He encouraged all the new settlers including the convicts to work hard for the benefit of the community and promised the reward of land upon emancipation. His instructions from the British government were to build amity with the local inhabitants and Phillip tried hard and faithfully to carry these out. Most notably, he declined to order punishment after himself being speared.

At a media conference, Abbott described Phillip as “the founder of modern Australia” but “we don’t know enough about him” or “acknowledge his contribution sufficiently”.

The government is yet to release the report of its review of the national school curriculum, including the area of history. The education minister, Christopher Pyne, said in January the review would consider concerns that the curriculum was “not recognising the legacy of western civilisation and not giving important events in Australia’s history and culture the prominence they deserve, such as Anzac Day”. 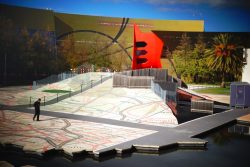 National Museum of Australia. Photo: Meredith Foley
Positions Vacant » View All
» Te Papa Foundation Relationship Manager – Te Papa
» Development Manager, Bequests & Friends – NMA
Latest News » View All
1/4 Australians lack of knowledge of Holocaust
Gandel Holocaust Knowledge & Awareness Survey Read more.
NMA first major redesign is a triumph
Finally, bold and imaginative Read more.
NMA hosts Asia TOPA
Asia-Pacific Triennial of Performing Arts Read more.
Te Papa’s Hiahia Whenua, Landscape & Desire
- historical & new landscape perspectives Read more.
Te Papa lets Sir Charles’ cicadas sing again
& 15MYO cicadas in AM/ UNSW research collab Read more.
Top +
Council of Australasian Museum Directors c/o Mr Brian Oldman, South Australian Museum PO Box 234 Adelaide, South Australia 5001 Australia, © CAMD 2022
Copyright: All information and resources provided on this website remain the copyright of the Council of Australasian Museum Directors. Permission is granted for viewing and downloading for personal and not for profit purposes. Those wishing to reproduce any materials for commercial, educational or other uses are requested to contact us.
Disclaimer: The content of this website is provided for information purposes only and is not intended as a substitute for professional advice. No claim is made as to the accuracy or authenticity of the content of the website. The Council of Australasian Museum Directors does not accept any liability to any person for the information or advice (or the use of such information or advice) which is provided on this website. The information on our website is provided on the basis that all persons accessing the site undertake responsibility for assessing the relevance and accuracy of its content. No responsibility is taken for any information or services which may appear on any linked web sites. Hostgator.
.