You are here: Home » Articles filed under: 'News' » Article: 'Democracy – and what Mark Twain said in the'

Democracy – and what Mark Twain said in the

Mark Twain: The man who would be (fictional) governor.

Erik Brady, Column: What Mark Twain said in the Buffalo Express about running for governor, The Buffalo News, 2 November 2020 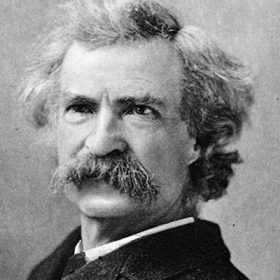 Mark Twain: The man who would be (fictional) governor.

Tuesday is Election Day. Accusations of ill intent, spurious and otherwise, are at the heart of our political moment. Mark Twain reminds us there is nothing new in that.

He wrote a piece in the Buffalo Express 150 years ago this month called “Running for Governor.” It’s a satire of the politics of character assassination, and of gleeful participation by news organizations. Chances are you’ve never heard of it — unless you grew up in China.

Just as American high school students have typically been assigned Twain’s “Adventures of Huckleberry Finn,” Chinese students in the mid-20th century were given Twain’s “Governor,” which became required reading soon after the establishment of the People’s Republic of China, and remained so for roughly 50 years. It portrayed the American political system as comically inept and hopelessly corrupt.

“Huckleberry Finn” is the great American novel. No less than Ernest Hemingway called it the book from which “all modern American literature comes.” (The manuscript, by the by, sits in a vault at the Buffalo and Erie County Public Library downtown.)

“Running for Governor” is barely known in the United States. Samuel Clemens was editor of the Buffalo Express when it was published. It is the story of his run for governor, as Mark Twain, in 1870 — well, fictional run, of course.

“A few months ago I was nominated for Governor of the great State of New York, to run against Stewart L. Woodford and John T. Hoffman, on an independent ticket,” Twain wrote. “I somehow felt that I had one prominent advantage over these gentlemen, and that was, good character.”

Hoffman, the incumbent Democrat, and Woodford, the Republican challenger, were the real candidates. And Twain’s notion of incipient scandal would prove true: Hoffman, a cog in the Tammany Hall political machine, would win re-election but was chased from office two years later, following a New York Times report tying him to the embezzlement of tens of millions of taxpayer dollars.

Twain’s column is a send-up of the sort of specious accusations that often arose in the newspapers during dirty political campaigns of that era — the sort of scurrilous stuff that, in our own time, is more often the purview of a particular cable network.

If Hoffman and Woodford had ever “known what it was to bear a good name, that time had gone by,” Twain wrote. “It was plain that in these latter years they had become familiar with all matter of shameful crimes. But at the very moment that I was exalting my advantage and joying in it in secret, there was a muddy undercurrent of discomfort ‘riling’ the deeps of my happiness — and that was, the having to hear my name bandied about with those of such people.”

Twain wrote to his grandmother for advice. Her answer comes back quick and sharp:

“You have never done a single thing in all your life to be ashamed of — not one. Look at the newspapers — look at them and comprehend what sort of characters Woodford and Hoffman are, and then see if you are willing to lower yourself to their level and enter a public canvass with them.”

That was his very thought, Twain exclaimed, and yet, after a sleepless night, decides that he must go on with the fight.
Then, he wrote, “As I was looking over the papers at breakfast, I came across this paragraph, and I may truly say I was never so confounded before.”

The paragraph asks if “Mr. Mark Twain,” now before the people as a candidate for governor, “will condescend to explain how he came to be convicted of perjury by 34 witnesses” in a bid to rob a poor widow and her family of a “meagre plantain patch, their only stay and support in their bereavement and desolation.”

Twain declares, of course, that no such thing ever happened, and that in any case he doesn’t “know a plantain patch from a kangaroo.” This is only the beginning of a daily drumbeat of phony felonies: Next he is accused of stealing from his cabinmates in Montana, a place where he has never been.

Before long, Twain is known in the papers as the Infamous Perjurer, the Montana Thief, the Body Snatcher, the Delirium Tremens, the Filthy Corruptionist and the Loathsome Embracer.

“I gave up. I hauled down my colors and surrendered. I was not equal to the requirements of a Gubernatorial campaign in the State of New York, and so I sent in my withdrawal from the candidacy, and in bitterness of spirit signed it,

“Once a decent man, but now

This story, after its appearance in the Express, ran in Galaxy Magazine. It would be widely reprinted in other American publications in the coming years — and translated for Chinese textbooks in the following century.

Guiyou Huang, a literary critic who is now president of Edinboro University in Pennsylvania, which is 110 miles from Buffalo, said Twain’s story was taught in China as a model of critical realism exposing the false democracy of a capitalist country.

“In other words,” Huang wrote of China, “all high school graduates know who Mark Twain is.”

They just don’t know that he was living in Buffalo during his ersatz gubernatorial campaign of 1870.