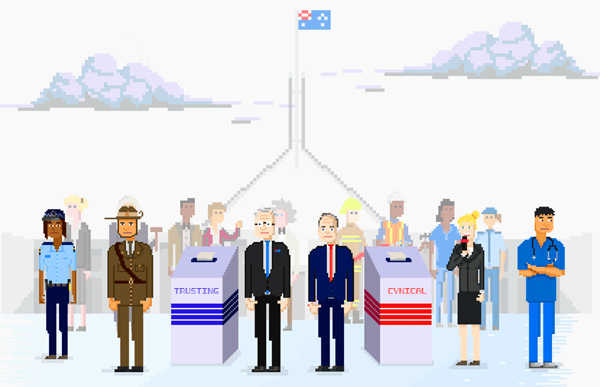 Mirror, mirror on the wall, who is the most cynical of us all?

Poll after poll shows satisfaction with the political system has plunged to unprecedented lows, in a nation not exactly known for its patriotic fervour.

And while Australians may pride themselves on being a cynical bunch, new research has revealed deep divisions between those content with the status quo and a growing underbelly for whom Australian democracy is quickly losing its shine.

Delving into the differences between more than 20 demographic groups, the research from the Museum of Australian Democracy and University of Canberra found distrust and disillusionment surpassed 80 per cent among some communities, while in others, more than 60 per cent remained happy with the current system.

So, are you more cynical than a swinging voter? More satisfied than the rich? Or more apathetic than Generation X? To see whether you’re more trusting or cynical than other Australians, take our quiz below. (You’ll need about 2 minutes.)

And rest assured your answers are not linked to your identity, nor will they be stored or passed on to anyone else. You trust us… right?

The quiz above includes about one third of the questions researchers posed to a nationally-representative sample of more than 1,000 Australians in July this year.

Their findings paint a vivid picture of just how disenchanted we are with our elected representatives.

Most Australians no longer trust any tier of government: federal, state or local council. 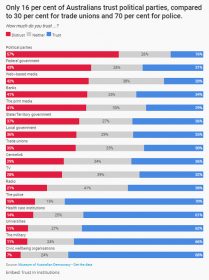 Government ministers and members of parliament — trusted by less than one in four — now rank as the least trusted compared to others such as GPs, judges, business people, journalists or trade unionists.

And the federal government is trusted by just 31 per cent of the population, while state and local government perform little better, at just over 35 per cent.

Notably, the survey was done before the most recent federal leadership bloodbath and in the midst of a record run of nearly three decades of economic growth.

“It’s unusual to see such a crisis in political trust when the economy is going so well,” said Professor Mark Evans from the University of Canberra’s Institute for Governance and Policy Analysis, which conducted the research.

“We are witnessing a vicious cycle of distrust and alienation from politics and the formal democratic process.”