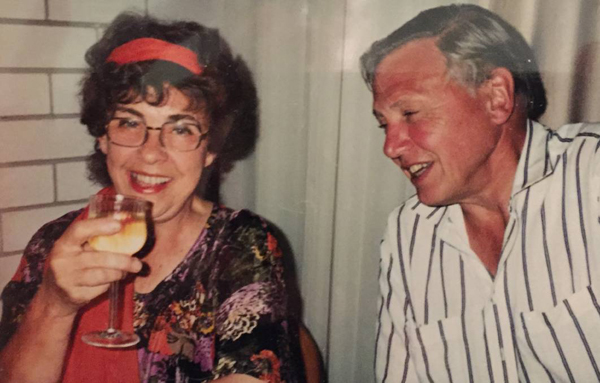 It was back in the 1960s that I first heard the name David Attenborough. As a young man, he was travelling the world collecting wild animals for London Zoo and filming for the BBC. David was also writing his first books in the Zoo Quest series. I had two of these in my library

On the other side of the world, I, too, was dealing with wild animals – not quite so exotic and certainly not as dangerous – the insects and spiders in my Australian garden. And in the 1960’s, I, too, was writing my first books. I couldn’t know that 35 years later, world-renowned film-maker, now Sir David, would be sitting in my Australian living-room belatedly signing his books for me!

This is how it came about. To show my small subjects in close-up, I had taught myself macro photography. Over the years, my innovative photographs were becoming well-known, but I lived a private life, gardening, writing, observing nature, never envisaging a career in wildlife.

Things were to change. One day in 1970, I was surprised by a visit visited from the well-known naturalist, Vincent Serventy and documentary film-maker, Robert Raymond.

They told me were making a film about Sydney’s wildlife. Familiar with my photographs, they were keen to include similar invertebrates in their movie, and asked me if I would consider filming some insect behaviour for them. But this would involve buying new equipment and adapting my techniques to movie-making.

I wasn’t all that keen to begin with. That soon changed.

I had recently become friendly with Jim Frazier, at the time Chief Preparator at the Australian Museum in Sydney. Jim was not a photographer . His interest was with snakes and other reptiles and his job was making scientific models for the museum displays. But when I I mentioned the filming possibility to Jim his response was instant: “Let’s do it together!” I was persuaded – how could I withstand such enthusiasm?

I introduced Jim to my garden insects and trusted him to play around with my precious Hasselblad camera. He caught on so quickly I was surprised and impressed. The die was cast.

We bought a second hand 8mm movie camera and after a few glitches it became clear that Jim was in his element. I had enough to do researching and handling our subjects and directing the sequence Jim’s filming. When we sent off a sample of our work to Vin and Bob, they were more than happy. Soon, my garden insects became movie stars for the first time.

Now, perhaps rather arrogantly, Jim and I decided we could make a film of our own. I wrote a one-hour script about the spiders in my garden including their remarkably complex sex life and with TV Channel 10 as sponsor we made our first documentary, ‘Aliens Among Us’.

I think, with hindsight, I should have put a query after that title. After all, we humans are the late-comers to this planet! But now, I wanted to set our sights higher.

I did. They liked it. They bought it. Then came a career-changing turn of events. Jim and I were invited by the BBC Natural History Unit in Bristol to form one of 10 teams filming for David Attenborough’s major TV series Life on Earth.

So it started. Over the next ten years, as Mantis Wildlife Films, Jim and I filmed in Australia and overseas for more BBC productions, including two other David Attenborough epics, “The Living Planet “and “The Trials of Life.”

The BBC sent us to Borneo, Palm Springs in the USA, West Sumatra, Penang and to various parts of Australia. We also filmed for several ABC/BBC co-productions and we made five more films for ourselves.

During l those years my ‘apprenticeship’ with the insects in my garden stood me in good stead whatever we were filming.. I was approached by three publishers and my book output increased enormously while Jim was already receiving major awards for cinematography.

In England, and on their visits to Australia, I got to know the BBC Natural History Unit producers, either as their house-guest or when they visited me in Sydney. A producer would often accompany Jim and me initially to an overseas location where they had already organised local help. What delightful and dedicated people they were.

But where was David? Away in the wilds, of course, producing more and more of his magic to bring the world of nature to our living rooms. And although it was his genius that inspired all the BBC filming that Jim and I did, it wasn’t until David’s 1990 trip to Australia with BBC producer Mike Gunston that I met him for the first time.

David was in Sydney for talks with the ABC Natural History Unit and we had an the opportunity to meet at last when he and Mike stayed with me in my Dural house.

Filming for ‘The Trials of Life’ had finished. It included some outstanding Australian insect stories that I had suggested for Jim to film. Now, David got to know some of my garden friends. And at last, he was able to sign his books for me.

While David was with me, I arranged a small dinner party in his honour, inviting Mary White, eminent palaeobotanist whose major books on Australian archaeology were already known to David.

Also invited were international award-winning film-makers, Jan Oldenhaven and Glen Carruthers.  Of course, Jim Frazier, my filming partner and his wife, Helen were there. Jim was, by now, the recipient of many international awards for his cinematography and I was into my 21st book. Many toasts to past and future successes were drunk on that night.

I was only able to meet David once more, and our meetings remain   important and happy memories. Time has passed, and like many thousands of others, I continue to watch, as the wonders of the wild world are brought  by David so brilliantly to our living rooms.

My book shelf is now full of  his major publications, but I treasure those Zoo Quest books so belatedly signed for me. We keep in touch on high days and holidays, not by email but by snail-mail which we both prefer.

I feel privileged to have met Sir David Attenborough and to have played some small part in creating his magic. He remains for me one of the outstanding adventurers, educators and conservationists of our time.