April 14th, 2022 | Browse other: News. | Tagged with: Caloprymnus campestris mitogenome, Mitogenome of the extinct Desert ‘rat-kangaroo’ times the adaptation to aridity in macropodoids |

The evolution of Australia’s distinctive marsupial fauna has long been linked to the onset of continent-wide aridity. However, how this profound climate change event affected the diversification of extant lineages is still hotly debated. Here, we assemble a DNA sequence dataset of Macropodoidea—the clade comprising kangaroos and their relatives—that incorporates a complete mitogenome for the Desert ‘rat-kangaroo’, Caloprymnus campestris. This enigmatic species went extinct nearly 90 years ago and is known from a handful of museum specimens. Caloprymnus is significant because it was the only macropodoid restricted to extreme desert environments, and therefore calibrates the group’s specialisation for increasingly arid conditions. Our robustly supported phylogenies nest Caloprymnus amongst the bettongs Aepyprymnus and Bettongia. Dated ancestral range estimations further reveal that the Caloprymnus–Bettongia lineage originated in nascent xeric settings during the middle to late Miocene, ~ 12 million years ago (Ma), but subsequently radiated into fragmenting mesic habitats after the Pliocene to mid-Pleistocene. This timeframe parallels the ancestral divergences of kangaroos in woodlands and forests, but predates their adaptive dispersal into proliferating dry shrublands and grasslands from the late Miocene to mid-Pleistocene, after ~ 7 Ma. We thus demonstrate that protracted changes in both climate and vegetation likely staged the emergence of modern arid zone macropodoids.

Arid zone marsupials are icons of Australia and have an inferred evolutionary history that extends back over some ~ 15 Ma1. Nevertheless, the precise divergence timings of the major extant clades are ambiguous, as are the possible drivers behind their adaptive radiations2,3,4,5,6,7,8,9,10,11,12,13.

Macropodoids (Macropodiformes: Macropodoidea)—the group encompassing living kangaroos, wallaroos, wallabies, pademelons and tree-kangaroos (Macropodidae), bettongs and potoroos (Potoroidae), the Musky rat-kangaroo (Hypsiprymnodon moschatus: Hypsyprymnodontidae), and their stem antecedents14—incorporate some of the most distinctive Australian arid zone marsupials, as epitomised by the famous Red kangaroo, Osphranter rufus15. The well-documented fossil record of this and other ‘true kangaroos’ (Macropodini) has been used to correlate arid zone macropodoid evolution with the expansion of intracontinental grasslands during the Pliocene and Pleistocene, from ~ 3–4 Ma3,9,12. By contrast, the contemporary diversification of xeric-adapted bettongs is often overlooked, but has considerable significance because it includes the only example of an exclusively desert-inhabiting macropodoid, the Desert ‘rat-kangaroo’, which is alternatively referred to as the “Oolacunta”16 or Ngudlukanta17, Caloprymnus campestris (Fig. 1A). 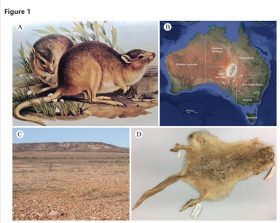 The first scientific specimens of C. campestris were collected from northeastern South Australia (Fig. 1B) in 1842, with three preserved examples subsequently shipped to London for study18. These were dubbed ‘Bettongia’ campestris by Gould19, although Thomas20 later recognised ‘B.’ campestris as morphologically distinct from Bettongia, and thus established a separate genus, Caloprymnus. No further sightings of C. campestris were reported after this initial description, and the species was assumed to be extinct for some 90 years until Finlayson16,21 announced the “Rediscovery of Caloprymnus campestris” in 1931–1932, from the remote Kooncheera Dune17 region in the Sturt Stony Desert of far northeastern South Australia (Fig. 1C). Since then, only a skin recovered sometime between 1902 and 1905 (Fig. 1D) has been reidentified22, and various unsubstantiated live sightings made17,23,24, with the most recent in 201124 and 201317 prompting unsuccessful surveys for the species in 2018 and 201917. Caloprymnus campestris has otherwise been classified as Extinct by the IUCN (https://www.iucnredlist.org/) since 1994, with the probable cause being over-predation by feral dogs, cats and foxes25.

At latest count, only 25 specimens of C. campestris are catalogued in museums worldwide22. This dearth of research material has led to uncertainty about potoroid interrelationships26, as well as the concomitant chronicle of their arid zone evolution. Here, we therefore analyse the first complete mitochondrial (mt) genome of C. campestris, which augments the 12S rRNA (AY245615) and partial cytochrome b (AY237246) gene sequences27 already available from GenBank (https://www.ncbi.nlm.nih.gov/genbank/). Our novel dataset is used to construct a comprehensive phylogeny of crown potoroid species and subspecies within Macropodoidea. We also apply molecular clock calibrated ancestral range estimations to infer both the timing and context of macropodoid habitat change over the last ~ 25 Ma.

Tree building employed Maximum likelihood and Bayesian methods implemented in RAxML 7.2.834, MrBayes 3.2.735 and BEAST 2.2.136 with node support calculations based on 1000 bootstrap pseudoreplicates (%) and Bayesian Posterior Probabilities (BPP), respectively. Maximum likelihood used a GTR + I + Γ partition model, while non-dated Bayesian MCMC analyses were run for 6 × 106 generations with a sample frequency of 1000, eight chains, default temperature of 0.2, and burn-in fixed at 6 × 104. Time-trees were constructed in BEAST 2.2.136 with relaxed clocks and the minimum–maximum node age constraints listed in the Supplementary Information. Up to 95% of the normal prior distributions were assigned to the interval between minimum and maximum, with 2.5% to each tail. Gamma priors (shape = 1; scale = 1) were assigned to the “ucld.mean” parameter for each partition. MCMC analyses were run for 65 × 106 generations with a burn-in of 10 × 106 generations and sampling every 10 × 103 generations. ESS values were > 200 for all estimated parameters. TreeAnnotator 2.2.1 (https://www.beast2.org/treeannotator/) was used to summarise the tree sample with mean node heights.

BioGeoBEARS comparisons proceeded with likelihood ratio testing of ‘Jumping dispersal events (+ J)’, which have been considered inappropriate for dispersal-extinction-cladogenesis (DEC) models42. However, the three parameter Bayesian inference of historical biogeography for discrete areas (BAYAREALIKE) + J model (P = 0.0006) received overwhelmingly highest support (AICc = 199.6; AICc_wt = 0.98) for conferring best statistical likelihood on our data (Supplementary Table S5). Finally, we accommodated for connectivity by designating a dispersal multiplier of ‘1’ for adjacent areas (A-B-C)41 versus non-adjacent areas (A-D)41, which were assigned a value of ‘0.5’.

The Caloprymnus campestris mitogenome (16,866 bp) is ordered with 13 protein-coding genes, two ribosomal (r)RNA genes, 21 transfer (t)RNAs, and a non-coding AT-rich control region, which follows the typical configuration for marsupials43,44. The tRNAs are arranged around the origin of the L strand (A-C-W-OL-N-Y) and intersected between the NADH2 and COX1 genes. Substitution of the anticodon GCC for tRNAASP (trnD) is also consistent with RNA-editing45.

Maximum likelihood and Bayesian analyses of our mitogenome dataset produce unanimous resolution of Macropodoidea with Potoroidae as the sister to Macropodidae (Supplementary Figures S1–S6). This pivotal higher-level grouping accords with other crown macropodoid phylogenies12,46,47,48,49, and warrants a new taxonomic definition50, which we coin as Macropodia, new clade, herein (Table 1; Supplementary Information). Bootstrap and BPP support is > 90% for almost all constituent nodes except those uniting: (1) the extinct short-faced kangaroo, Simosthenurus occidentalis, with the Banded hare-wallaby, Lagostrophus fasciatus, as basally branching macropodids (partitioned/non-partitioned bootstrap = 58/63%; MrBayes partitioned/non-partitioned BPP = 0.54/0.56; BEAST partitioned/non-partitioned BPP = 1/1); (2) the Quokka, Setonix brachyurus, with other macropodines (bootstrap = 48/60%; MrBayes BPP = 1/1; BEAST BPP = 0.63/0.72); (3) grey kangaroos in the genus Macropus with Osphranter rufus and brush wallabies representing the genus Notamacropus (bootstrap = 80/64%; MrBayes BPP = 0.99/1; BEAST BPP = 0.99/0.96); and (4) O. rufus with Notamacropus (bootstrap = 58/55%; MrBayes BPP = 0.81/1; BEAST BPP = 0.72/0.76). As found by previous studies5,12,27,46,47,48,49,50,51, Potoroinae comprises potoroos within the genus Potorous and is distinguished from its sister clade, which we designate Bettonginae52 to include the Rufous bettong, Aepyprymnus rufescens, as the basally branching sister to C. campestris and the species of Bettongia (Table 1). Alternative monophyly of C. campestris with either A. rufescens53,54, or the species of Potorous27,50 were tested using topological constraints in PAUP* 4.0b1055 (Supplementary Table S6), but decisively rejected (P < 0.0001***). Taxonomically, therefore, we conclude that the original classification of Gould’s Desert ‘bettong’19 as generically consistent with Bettongia is feasible, but defer any formal nomenclatural amendment pending a detailed morphological re-evaluation.