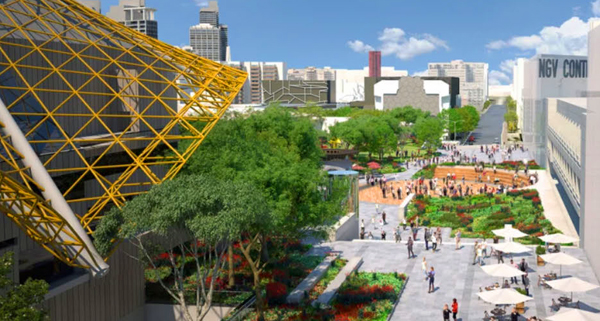 Melbourne’s $1 billion new arts precinct at Southbank will feature an elevated park, garden and pedestrian spaces to be partly designed by a New York-based firm.

The elevated park, gardens and other pedestrian spaces will link Southbank’s 40 galleries, theatres and arts organisations with the new NGV Contemporary, the revamped Arts Centre and its new Performing Arts Museum.

Both firms have serious form in designing cultural institutions and open spaces.

Hassell’s recent projects include a museum in Western Australia and a revamp of the Australian Ballet’s Melbourne headquarters. It has two other state government projects here: the $39 million redevelopment of Geelong Performing Arts Centre, and Melbourne Metro Tunnel.

Solid Objects Idenburg Liu – known as SO-IL – has created structures for Frieze Art Fair in New York and the London University of Art’s Fashion School, and is redeveloping public space on the banks of the Seine in Paris.

The design teams are enlisting some serious green thumbs for the Southbank project: horticulturalists Nigel Dunnett and James Hitchmough, who transformed London’s Barbican performing arts centre, and the city’s Olympics precinct for the 2012 Games with fields of flowers.