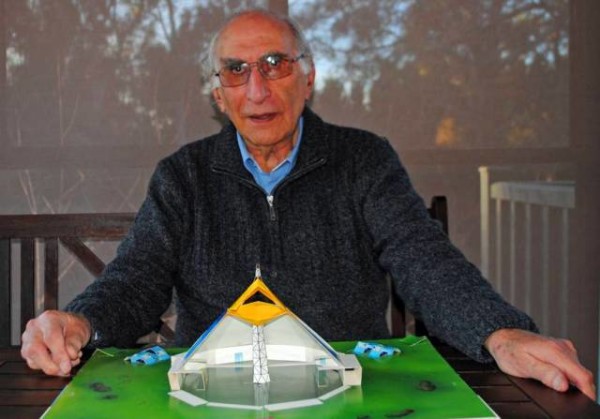 Hill Top resident Desmond Kennard has been awarded an OAM for services to the visual arts (pictured with a model of the travelling Bicentenary tent). Photo: Ainsleigh Sheridan. Source: southernhighlandnews.com.

CAMD congratulates Desmond Kennard who was recently awarded an OAM. Mr Kennard has held positions as the Executive Director of Sovereign Hill in Ballarat, and the Deputy Director of the Powerhouse Museum as well as the Chief Executive Officer, Sydney Maritime Museum (now Sydney Heritage Fleet). In 1988 he was the Director of the Australian Bicentennial Exhibition—an extensive travelling exhibition which involved 81 vehicles that toured to 34 destinations across Australia.

Back in 1988 it was the celebration of a nation, but in 2015 Desmond Kennard is celebrating a national honour of his own.

The Hill Top resident has been awarded an OAM for services to the visual arts, particularly to the museums and galleries sector.

His CV is filled with positions of interest and ideas – director of Sovereign Hill in Ballarat, the Museum of Applied Arts and Sciences in Sydney, to name but two – but it is perhaps his work as director of the Australian Bicentennial Exhibition from 1985 to 1989 of which he’s most proud.

The self-described amateur artist – “but I have lots of ideas; innovation is my forte” – had wanted to be a vet, then worked as a jackaroo for a couple of years before studying studied applied psychology and beginning his career in arts administration.

Mr Kennard says he has always taken a collaborative approach to his curatorial roles, establishing in-house planning committees that included a variety of staff, from admin to education officers, security to janitors.

“That way we always had more than one person’s view,” he said.

The Bicentennial Exhibition, a “tent city” that cost $28 million to travel to 34 Australian cities and towns, was a huge logistical challenge that Mr Kennard relished.

“How do we communicate, how do we feed and house staff, how do truck it around the country?” he said.

He engaged the then Australian satellite company AUSSAT for their services, commissioned a travelling caterer, dozens of multi-bunk caravans, and deployed training for staff to drive the exhibition trucks, for a start.
See your ad here

It’s quite a legacy, but his wife Pat believes his greatest work was as “a very good mentor for a lot of upcoming museum people”, seeing the sector into the future.