You are here: Home » Articles filed under: 'News' » Article: 'Dialogue of civilizations at heart of'

Dialogue of civilizations at heart of

May 9th, 2019 | Browse other: News. | Tagged with: dialogue of civilizations needed to make a better world, director NMA, Mathew Trinca | 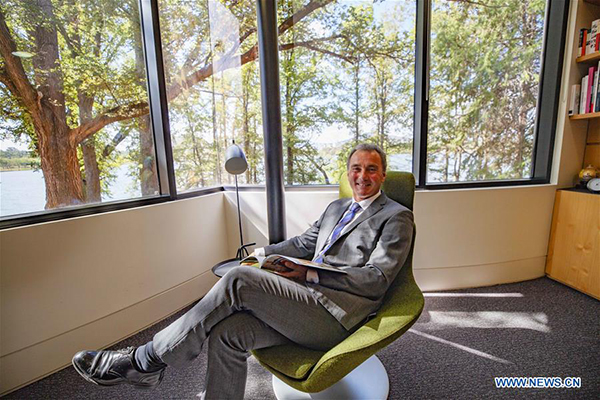 CANBERRA, May 3 (Xinhua) – Dialogue between civilizations is at the heart of making the world a better place that people want to live in, said Mathew Trinca, director of the National Museum of Australia (NMA).

“You know, in isolation, our ideas stay at one level. But if we join with others, we actually change. We are changed by them, and hopefully we can have some change upon them as well,” he told Xinhua in an interview before the Conference on Dialogue of Asian Civilizations to be held in Beijing later this month.

“The opportunity to share ideas is always one in which you learn, and you’ll say your ideas get better,” he said.

GETTING CLOSER BY SHARING STORIES

NMA had its permanent home by Lake Burley Griffin in the center of the Australian capital Canberra in 2001. Trinca joined NMA as a senior curator in 2003, and became director of the museum in 2014.

NMA signed a memorandum of understanding with the National Museum of China in 2011, where a 150-piece “Old Masters” art exhibition with Australian indigenous artists was launched last July.

As an exchange, an exhibition namely The Historical Expression of Chinese Art: Calligraphy and Painting from the National Museum of China opened in NMA on April 5. Consisting of more than 100 objects from China, including a rare 20-meter-long replica of the first scroll of Emperor Qianlong’s Southern Inspection Tour, it explores the grand historical sweep of Chinese art and calligraphy traditions.

“I think there’s a deep truth in all human life that when we share our stories with others, we learn about ourselves in the act of sharing with others,” said Trinca, adding that by exchanging exhibitions with the Chinese museums, he hoped that Australian people and the Chinese can learn about stories of each other.

“When two nations come together and their peoples come together, and they’re prepared to exchange stories, they learn about each other,” he said. “They develop relationships in ways that otherwise, I think would be impossible. And that’s really what’s going to hold us together as two nations whose history has been intertwined. And I think our future is going to be similarly linked.”

Due to his tight schedule, Trinca is not able to attend the Conference on Dialogue of Asian Civilizations, but he attended an international forum of museum directors in China.

“You know, in Asia Pacific, the value of creative industries here in this region is greater than anywhere else,” he said.

Talking about the cultural features in Australia, Trinca believed that the aboriginal culture was definitely an important part.

“This is a land of long human history reaching back 65,000 years,” he said. “So many First Nations have lived on this continent for centuries, for millennia. That story is a big story, not just for Australians, but for the world.”

At the same time, Australia is also known as a multicultural country with immigrants from across the world. “Over the course of the last 100 years or so, we’ve welcomed people from all around the world to these shores. Now we have more than two hundred languages spoken here in homes across the nation.”

“It connects us to the global history in a way that the movement of people around the world have changed our lives over time, and from them the Australian gained very strong foundations of the modern society,” he said.

China is the biggest single source of immigrants. “Chinese is the most spoken language in this country, apart from English,” Trinca said. “More than 1.2 million Chinese people live in Australia at this point of time.”

In spite of the difference of culture behind China and Australia, Trinca said that cultural connection between the two countries is close.

“(We now have) the third exchange in the space of 20 years,” he said. “I can’t think of that having been replicated with any other nation around the world. It’s a sign of how strong the connections are between our two countries.”

He is now thinking of something new “for where our relationship might go next”. “Working together, to make a show together,” he said. “It would be wonderful if we move into a new phase where we actually make an exhibition together that then travels the world.”

Looking into the future, Trinca is optimistic. “Our future is going to be even brighter than our past.”