November 18th, 2021 | Browse other: News. | Tagged with: Dick Smith comes through on his promise to give away more money, Dick Smith to give away $5 million to nearly 70 charities and organisations | 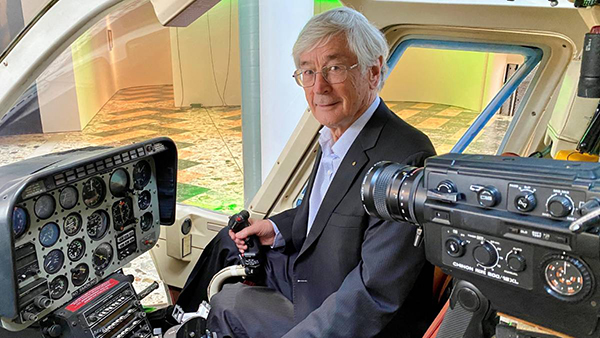 Dick Smith at his book launch this week at Sydney’s Powerhouse Museum where his solo-around-the-world helicopter VH-DIK is an exhibit. Picture: Supplied.

Megan Doherty, Dick Smith comes through on his promise to give away more money, The Canberra Times, 12 November 2021

Businessman, philanthropist and newly-published author Dick Smith has made good on this promise to keep giving his money away.
As flagged last week in The Canberra Times, with the publication of his autobiography My Adventurous Life, Smith wanted to use the official launch of his book this week to give away $5 million to nearly 70 charities and organisations.

The list of charities and organisations receiving the money from Dick and Pip Smith.

The amount included $1 million each to the Scout Association of Australia and to the Salvation Army.

Smith wrote in the book how influential the scouting movement was in encouraging his sense of adventure and leadership, and he also wanted to help charities who helped people who were “hurting”. The $5 million is on top of the $70 million Smith and his wife Pip have already given away.

The second-last sentence of his book made clear his intention: “So the years ahead for me will be about giving back”.
The book launch was at the Powerhouse Museum in Sydney where Smith’s solo-around-the-world helicopter VH-DIK is an exhibit.

“We had about 50 or 60 people at the launch, mainly our friends, and we felt really good about being able to donate the money. But as I said, I just look on it as fulfilling an obligation,” he said.

The recipients of the generous donation ranged from the Royal Flying Doctor Service to Youth Off the Streets, to Amnesty International, to the Australian Ballet School.

Canberra-based institutions the Australian War Memorial, National Museum, National Library, National Gallery and the National Film and Sound Archive all received $10,000 each from the Smiths.

Smith said he’d had so far had a good reaction to his autobiography, written at the age of 77.

“It’s been really positive,” he said.