You are here: Home » Articles filed under: 'News' » Article: 'Digital and Analog' 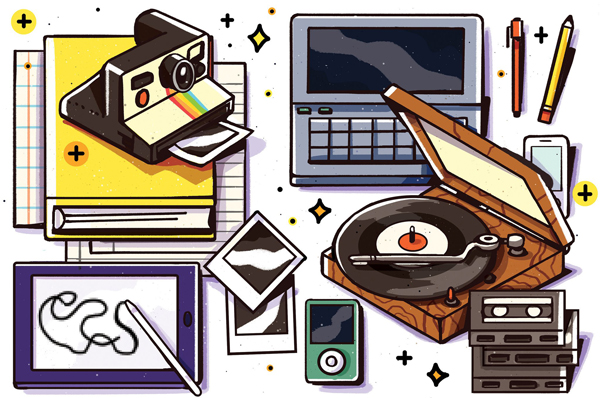 David Sax, Our Love Affair With Digital Is Over, NY Times, 18 November 2017

A decade ago I bought my first smartphone, a clunky little BlackBerry 8830 that came in a sleek black leather sheath. I loved that phone. I loved the way it effortlessly slid in and out of its case, loved the soft purr it emitted when an email came in, loved the silent whoosh of its trackball as I played BrickBreaker on the subway and the feel of its baby keys clicking under my fat thumbs. It was the world in my hands, and when I had to turn it off, I felt anxious and alone.

Like most relationships we plunge into with hearts aflutter, our love affair with digital technology promised us the world: more friends, money and democracy! Free music, news and same-day shipping of paper towels! A laugh a minute, and a constant party at our fingertips.

Many of us bought into the fantasy that digital made everything better. We surrendered to this idea and mistook our dependence for romance, until it was too late.

Today, when my phone is on, I feel anxious and count down the hours to when I can turn it off and truly relax. The love affair I once enjoyed with digital technology is over – and I know I’m not alone.

Ten years after the iPhone first swept us off our feet, the growing mistrust of computers in both our personal lives and the greater society we live in is inescapable.

This publishing season is flush with books raising alarms about digital technology’s pernicious effects on our lives: what smartphones are doing to our children; how Facebook and Twitter are eroding our democratic institutions; and the economic effects of tech monopolies.

A recent Pew Research Centre Survey noted that more than 70 percent of Americans were worried about automation’s impact on jobs, while just 21 percent of respondents to a Quartz survey said they trust Facebook with their personal information. Nearly half of millenials worry about the negative effects of social media on their mental and physical health, according to the American Psychiatric Association.

As much as we might fantasize about it, we probably won’t delete our social media accounts and toss our phones in the nearest body of water. What we can do is to restore some sense of balance over our relationship with digital technology, and the best way to do that is with analog: the ying to digital’s yang.

Thankfully the analog world is still here, and not only is it surviving, in many cases it is thriving. Sales of old-fashioned print books are up for the third year in a row, according to the Association of American Publishers while ebook sales have been declining. Independent bookstores have been steadily expanding for several years. Vinyl records have witnessed a decade-long boom in popularity (more than 200,000 newly pressed records are sold each week in the United States), while sales of instant-film cameras, paper notebooks, board games and Broadway tickets are all growing again.