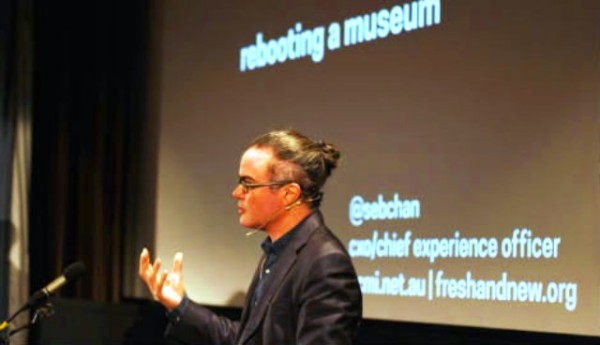 The chief experience officer on where the real opportunities of digital technology lie for museums.

Seb Chan is the chief experience officer at the Australian Centre for the Moving Image (ACMI) in Melbourne.

He previously worked at the Cooper Hewitt Smithsonian Design Museum in New York as the director of digital and emerging media, and he helped turn the museum into a playful and interactive space following a major redevelopment.

Chan spoke at Arts Council England’s No Boundaries conference last month about how museums can do things differently.

At No Boundaries, you talked about “threshold fear” and “turning monasteries into town squares” – what do these terms mean in relation to museums and how did you address them in your previous role at Cooper Hewitt?

“Threshold fear” is a term coined by museum consultant Elaine Gurian in 2005 in her paper of the same name. She describes it broadly as “the constraints people feel that prevent them from participating in activities meant for them”.

The “monasteries into town squares” was a quote from one of the other speakers, Vasif Kortun of the Salt Gallery in Istanbul. It is a reference to the challenge of transforming museums from a monastery, where scholars work in protected silence, to that of a town square where there is an open, noisy and sometimes chaotic bustle of contested ideas.

At No Boundaries, I spoke specifically of the inappropriate architecture of the Cooper Hewitt’s ornate and imposing Carnegie Mansion surrounded by a spiked high fence – and the challenge of transforming a building designed as a private home to keep the public out into a welcoming public institution.

Although the building still imposes a threshold fear on the unfamiliar, we wanted to ensure that once inside visitors would tell their friends that it wasn’t what they expected it was going to be.

Part of this work focused on introducing a new physical device, known as The Pen, which actively encourages doing rather than just looking. The digital device allows visitors to collect objects from around the galleries and create their own designs on interactive tables.

We also changed the brand of the museum to be more interesting to younger and more diverse audiences. Then we gave those audiences an experience that fitted or exceeded their expectations.

What was the biggest learning from the project that you’d like to share with the wider sector?

The biggest learning was that investing in a highly competent internal technical team meant the museum was able to deliver and sustain a considerably more transformational and holistic set of systems built in conjunction with many external collaborators than if we’d entirely outsourced the project.

This internalising of risk meant that the museum was better informed and more committed to its own future – and began to develop new muscles that will enable it to thrive as long as the appropriate levels of staffing continue.

Where do you think the greatest potential of digital technology lies for museums?

Too much interest in digital technology has been in the very last mile of delivering content to visitors through websites, mobile apps and games, and not enough has been on focusing on how all museum experiences and interactions are now impacted by digital technology.

Technology still offers so much promise in terms of speed, reach, scale, and citizen participation – none of which have been done very well by museums yet.

But I am hopeful that, as we start to see some digital officer roles working at a strategy level, we will see museums finally build digital thinking into all their operations and we will see museum missions beginning to change to reflect this.

The largest national institutions in the US and western Europe really have no excuse not to be having a much greater impact and doing digital in a manner that isn’t limited to digital marketing, e-commerce or superficial apps.

You’ve recently moved back to Australia to join the ACMI – what ambitions do you have for your role there?

ACMI is the largest moving image museum in the world, and currently the second most visited public institution in Australia. It is at a fascinating moment in its history as it has a new director and executive management team, and a strong history of exhibitions and education programming.

I’m excited to join ACMI at this moment and help it make more use of its unique mix of exhibition galleries, cinemas and online platforms through a holistic design strategy.

We are in the early days but I’m very interested in working with the teams at ACMI to figure out what sort of impact we want to have on people who come to see a film or exhibitions, or to play one of any number of videogames that we have curated.

How are their lives changed, how are their ideas challenged and how does the experience impact their own media choices?

And, using service design methodologies, how might ACMI need to change how it delivers the entirety of its services and offerings in ways that maximise that impact? Is our infrastructure or our ways of working preventing us from having even greater impact?

The idea of a chief experience officer is about taking what used to be limited in a chief digital officer’s role – that is “digital transformation” – and exploding that out across the whole organisation.

I expect much of my work in the coming years will involve closely observing how the museum and all its services are being used and then helping nudge them in new directions.