You are here: Home » Articles filed under: 'News' » Article: 'Dinosaur tourism capital of the world?'

Dinosaur tourism capital of the world?

Pearl Langdon thought her husband Doug had gone mad when he came home on a hot afternoon in October 1963 with what he claimed was a dinosaur bone in his saddlebag.

“He showed me and said, ‘I’ve found a dinosaur’,” Mrs Langdon said.

Despite his wife’s scepticism, it turned out Mr Langdon was right.

The bones he discovered on the banks of the Thomson River near Muttaburra in central west Queensland were that of a herbivore that lived 100 million years ago, now called the Muttaburrasaurus langdoni.

It was the start of many dinosaur discoveries across western Queensland and almost 60 years later a niche paleo tourism industry is booming.

A region built on the sheep’s back, western Queensland is now riding high on the dinosaur’s tail.

A route known as the Australian Dinosaur Trail is expanding, and museum operators are confident Queensland’s outback is well on its way to becoming the dinosaur capital of the world. 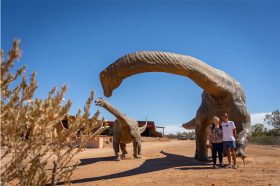 The March of the Titanosaurs features at the Australian Age of Dinosaurs in Winton, Queensland.(ABC Western Queensland: Ellie Grounds).

A chance discovery of fossilised dinosaur bones on his sheep station near Winton in 1999 drastically changed the direction of David Elliott’s career.

“We soon realised the vast majority of Australia’s dinosaurs were found in the Winton region,” Mr Elliott said.

“We thought we can’t just put them in a shed in town. We’ve got to actually do something bigger.”

Mr Elliott is now the Executive Chairman of the Australian Age of Dinosaurs in Winton, the first museum to display the west’s most prehistoric inhabitants. 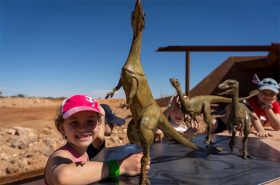 It has gone from strength to strength and international border closures have paradoxically provided a boost.

“[Then] the second half of the year from July onwards boomed.

“We actually met our targeted number for the year, even in spite of the fact we were closed for three months.

“This year so far our visitation has probably been about double or better of what it was in any other year.” 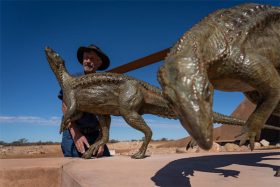 The museum’s latest attraction, which opened this week, includes a 54-metre-long preserved trackway of sauropod footprints and a host of new dinosaur statues of all sizes, ready for the obligatory tourist selfie.

Already the new exhibit is winning over even the most cynical tourists.

“But how wrong we were. It’s absolutely amazing.”

“The fact that they have lifted that fossilised footprint from 60 kilometres away and transported it here is just mind-boggling-ly a work of art,” said her husband David. 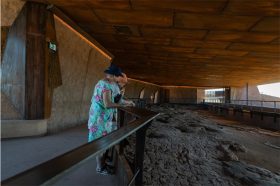 Eromanga Natural History Museum director Robyn Mackenzie said that set the region apart from the rest of the country.

“These dinosaurs are huge,” she said.

“They’ve previously only been found to this size over in places like South America.” 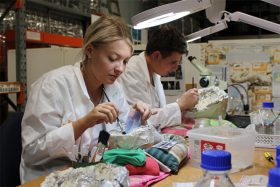 These massive, mysterious creatures have lured droves of visitors to a part of the state that didn’t used to see tourists.

“A lot of people don’t know what to expect because they haven’t travelled through to this part of Queensland before,” Mrs Mackenzie said.

“No one leaves disappointed.

“Everyone is completely blown away and just love what they see and rate it as one of their best experiences.”

Mrs Mackenzie said there had been a 25 percent increase in tourism in the region since the museum opened five years ago, and it continued to grow significantly year on year. 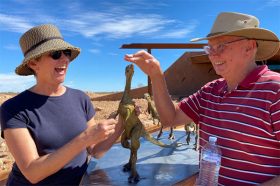 Brisbane tourists Cyndi and David Heard were skeptical of dinosaur museums until they visited this one.(ABC Western Queensland: Ellie Grounds).

Story of Muttaburrasaurus discovery will ‘live on forever’

The latest town to pay homage to its dinosaur finds is Muttaburra, in the very centre of Queensland.

Twelve years after the local community association asked the council for a dinosaur museum, the Muttaburrasaurus Interpretation Centre opened.

It provides shelter for a replica statue ‘Dino’, which has been in the town since 1993, and tells the story of how the late Doug Langdon and his horse stumbled across those prehistoric fossils almost six decades ago. 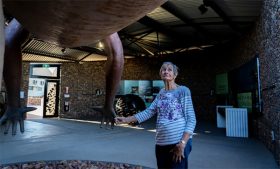 It’s already been a big hit with tourists.

“The first thing they do when they come in is run over and start pulling on his fingers, playing around his legs. 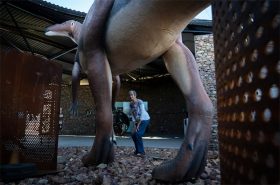 The state government recently promised nearly $500,000 over three years to deliver a “roadmap” to grow the Australian Dinosaur Trail.

It would be spent on website content, signage and brochures to help paleo-enthusiasts plan their dream holiday to attractions in Eromanga, Winton, Muttaburra, Hughenden and Richmond.

The government estimates dinosaur attractions account for 11 percent of all Queensland’s tourism, and 26 percent of leisure tourism. 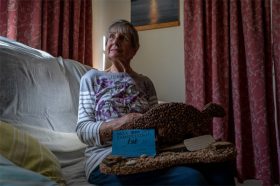 Robyn Mackenzie said the roadmap would help establish a “brand” for outback dinosaur attractions that could be marketed to domestic and international travellers.

“Having everybody all together under the one banner is going to create a lot more interest and a lot more pull.

“I think the future for dinosaur tourism and any type of paleo tourism at all is really exciting. 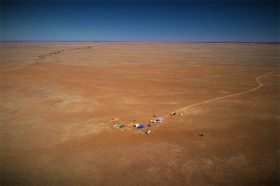 “We can be the Uluru of Queensland, and there’s no reason why not,” he said.