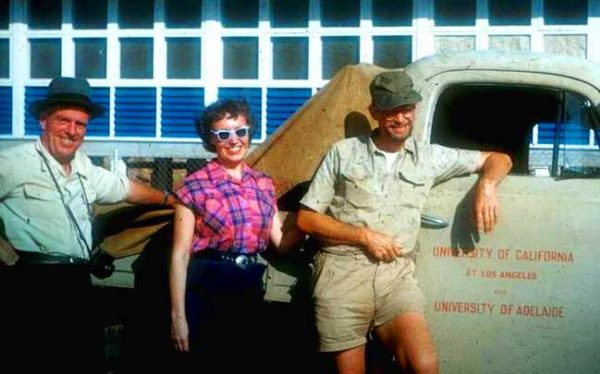 Left to right – Norman Tindale, Birdsell’s wife Esther and Joseph Birdsell, 1952. The researchers were accompanied by their wives on both expeditions.

A secret store of Aboriginal hair, taken for terrible reasons, may now tell a story tens of thousands of years old.

Now seen as DNA samples, the thousands of hair strands can be used to reveal the history of Indigenous people and their attachment to land – but will descendants approve?

In a locked room in Adelaide, stored among the South Australian Museum’s collection of Aboriginal cultural items too sensitive or sacred to be publicly displayed, sits a filing cabinet full of envelopes. There are around 7,000 of them, each of them small and neatly labelled with an inky handwritten number, and each holding a lock of human hair. Collected from Aboriginal men, women and children by anthropologists in the 1930s and 1950s, the hair was snipped, had its colour and texture noted and was then consigned to nearly a century of obscurity. Now an ambitious project, bringing together geneticists and those Aboriginal people’s descendants, is aiming to use these thousands of aged strands of hair to piece together 50,000 years of our continent’s genetic history.