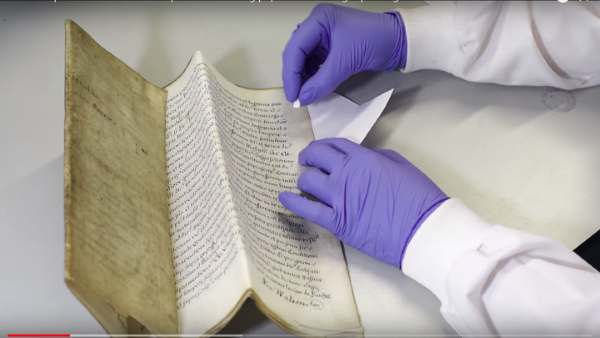 Even the beeswax used in seals is rich with data about the past, including the flowers that grew in that region year to year.

It was in the archives of the Archbishop of York that Matthew Collins had an epiphany: He was surrounded by millions of animal skins.

Another person might say they were surrounded by books and manuscripts written on parchment, which is made from skins, usually of cows and sheep. Collins, however, had been trying to make sense of animal-bone fragments from archaeological digs, and he began to think about the advantages of studying animal skins, already cut into rectangles and arranged neatly on a shelf. Archaeologists consider themselves lucky to get a few dozen samples, and here were millions of skins just sitting there. “Just an obscene number,” Collins told me, his voice still giddy at the possibilities in their DNA.

In recent years, archaeologists and historians have awakened to the potential of ancient DNA extracted from human bones and teeth. DNA evidence has enriched—and complicated—stories of prehistoric human migrations. It has provided tantalizing clues to epidemics such as the black death. It has identified the remains of King Richard III, found under a parking lot. But Collins isn’t just interested in human remains. He’s interested in the things these humans made; the animals they bred, slaughtered, and ate; and the economies they created.

That’s why he was studying DNA from the bones of livestock—and why his lab is now at the forefront of studying DNA from objects such as parchment, birch-bark tar, and beeswax. These objects can fill in gaps in the written record, revealing new aspects of historical production and trade. How much beeswax came from North Africa, for example? Or how did cattle plague make its way through Europe? With ample genetic data, you might reconstruct a more complete picture of life hundreds of years in the past.

Collins splits his time between Cambridge and the University of Copenhagen, and it’s hard to nail down exactly what kind of -ologist he is. He has a knack for gathering experts as diverse as parchment specialists, veterinarians, geneticists, archivists, economic historians, and protein scientists (his own background). “All I do is connect people together,” he said. “I’m just the ignorant one in the middle.”

Collins began his scientific career studying marine biology, thanks to a formative teenage viewing of Jaws. He specialized first in marine fossils and, later, in the ancient proteins hidden inside them. This turned out to be a dead end. For the most part, the fossils were too old and the proteins no longer intact enough to study. He was forced to look at younger and younger material, until he crossed from paleontology into archaeology. He applied the techniques of protein analysis to pottery shards, in which he found milk proteins that hinted at the diet of the people who used those pots.

Collagen, a protein abundant in bone, also turns out to be especially useful. A student of Collins’s named Michael Buckley developed a technique called ZooMS to analyze bone collagen and rapidly ID the type of animal it came from. Scientists recently used ZooMS to identify a human bone sliver found in a Siberian cave; further DNA analysis revealed it to be the bone of a half-Neanderthal girl.

Collins quickly realized that DNA held even more potential than ancient proteins, which can be “a blunt tool compared to DNA.” The DNA of any single animal is, after all, a library coding for all the proteins their cells can make. “DNA is a phenomenally powerful tool,” he said. “There’s so much information there.” So when Collins embarked on the parchment project, he gathered a team that included geneticists as well as archivists, bookmakers, and historians.

It didn’t take long for the group to hit their first culture clash. In science and archaeology, destructive sampling is at least tolerated, if not encouraged. But book conservators were not going to let people in white coats come in and cut up their books. Instead of giving up or fighting through it, Sarah Fiddyment, a postdoctoral research fellow working with Collins, shadowed conservationists for several weeks. She saw that they used white Staedtler erasers to clean the manuscripts, and wondered whether that rubbed off enough DNA to do the trick. It did; the team found a way to extract DNA and proteins from eraser crumbs, a compromise that satisfied everyone.

The team has since sampled 5,000 animals from parchment this way. They’ve found that a type of ultrafine parchment, sometimes purported to come from squirrels or rabbits, actually comes from the typical cow, sheep, or goat—and that the thinness of the parchment is the result of the parchment makers’ skill. They’ve compared the genomes of cows in parchment with that of modern ones, finding similarities to Norwegian Reds and Holsteins. They’ve found that the parchment comprising a 1,000-year-old book known as the York Gospels seemed to come mostly from female calves, which was puzzling because you usually want female calves to grow up to give birth to more cattle. A zooarchaeologist on the team suggested that an outbreak of cattle plague might have killed those calves first.

Collins is not the first person to think of getting DNA from parchment, but he’s been the first to do it at scale. Timothy Stinson, an English professor at North Carolina State University, published a paper on parchment DNA in 2009. He had batted the idea around with his brother, a biologist, and they sent off parchment samples to a commercial DNA lab. But even once he demonstrated that it was possible, Stinson had trouble getting more funding for the project.

It was a case study in why interdisciplinary research is difficult. The National Science Foundation would tell him that they didn’t work on livestock, and he should call the USDA. He’d talk to the USDA, and they’d tell him that medieval books fell under the purview of the National Endowment for the Humanities. He’d talk to humanities people, and they’d say, Genetics research? That already has all the money. “I really did get on this constant loop of everyone wanting me to call someone else,” Stinson says. Then Collins got in touch to collaborate—he had gotten a big grant from the European Research Council that encouraged interdisciplinary teams. Stinson is interested in how monasteries and courts sourced the parchment in their documents, and what that reveals about economic contacts in different medieval settings.

Earlier this year, Collins won a grant from the Carlsberg Foundation to study beeswax. In honor of the bees, he dubbed the project ArcHives. The idea originally came from an archivist who showed Collins a document with a wax seal. Collins is excited about the possibilities of DNA in beeswax—from humans handling the wax seal, from the bees themselves, and from pollen trapped inside. The DNA could reveal who worked with beeswax, where in the world it came from, and even the flowers that grew in that region year to year. And as with parchment, Collins went searching for experts in the history and production of beeswax. Alexandra Sapoznik, a medieval historian at King’s College London, has studied the historic beeswax trade. When Collins reached out to her, she remembers thinking, Wow, someone else, wax! She is particularly interested in how beeswax made its way from beekeepers in North Africa to Europe.

When it comes to the world of archaeology and DNA, “Matthew Collins knows everybody,” says Thomas Gilbert, a geneticist at the University of Copenhagen who has studied DNA from artifacts such as aurochs horn. Gilbert recruited Collins to the University of Copenhagen. Since then, they have worked together on another project getting DNA out of millennia-old chewing gum from birch-bark tar.

Studying the DNA in artifacts is still a relatively new field, with many prospects that remain unexplored. But in our own modern world, we’ve already started to change the biological record, and future archaeologists will not find the same trove of hidden information in our petroleum-laden material culture. Collins pointed out that we no longer rely as much on natural materials to create the objects we need. What might have once been leather or wood or wool is now all plastic.