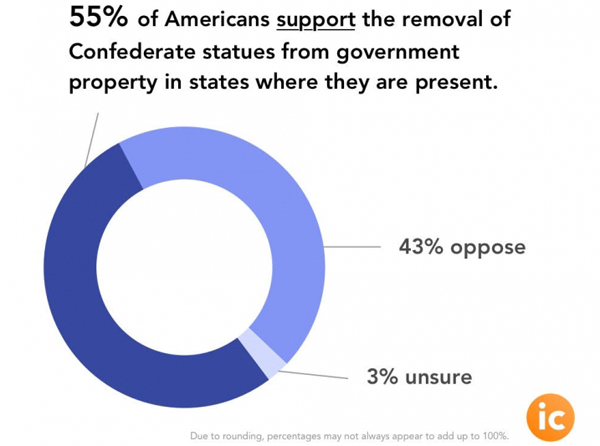 A new poll suggests that a majority of people in the US want the statues removed, but others have found that popular opinion favors keeping them in place.

A new poll released last week shows that a majority of Americans supports the removal of Confederate statues from government property. According to an online survey conducted by software company icitizen, 55% of the 2,158 adults who participated are in favor of removal. Meanwhile, 43% of those polled would like the statues to remain, while 3% are unsure

The poll considers responses collected between August 6 and 21, encompassing the week prior to the violent, fatal protests in Charlottesville as well as the days after, when national discourse over the fate of public Confederate statues and symbols exploded. The eight-question survey asked participants whether they “strongly” or “somewhat” supported or opposed removal, also giving the option to identify as “unsure.” Another question centered on the Confederate flag and whether it symbolizes Southern heritage or racial hatred; responses to that query were similarly distributed, with 41% believing the former, and 49% the latter. In addition to their political affiliation, participants were asked to share their age, race, gender, state of residence, and level of education. 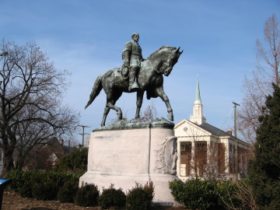 Statue of Robert E. Lee in Charlottesville, Virginia, whose removal white nationalists were protesting at a “Unite the Right” rally (photo by Cville dog, via Wikimedia Commons)

However, the poll conducted by icitizen is only one of several that have attempted to gauge Americans’ feelings toward these highly contested public statues. And methodology matters, as the disparate results show. The icitzen poll only counts votes by registered users of the site, and its questions broadly consider the presence of the monuments. A poll conducted by Marist for NPR and PBS NewHour, though, uses language more specific that incorporates reason. That survey polled 1,125 US adults over the phone, on August 14 and 15, and asked them if statues honoring leaders of the Confederacy should either “remain as a historical symbol” or “be removed because they are offensive to some people.” That poll found 62% of respondents in favor of keeping them, while 27% wanted to remove them.Further analysis by icitizen revealed that support for the statues’ removal was strongest among millennials (63% support), women under the age of 50 (65% support), racial minorities (68% support), and people from regions other than the South. On the flip side, 51% of seniors oppose removal, as do 52% of men over 50 and 51% of Southerners. In terms of political standing, the poll found that 90% of responders who identified as Democrats support removal and 88% who identified as Republicans oppose it. About 56% of Independents would also like to see the monuments come down. (Opinions regarding the Confederate flag largely mirrored those toward the removal of Confederate statues.)

From Reuters, we have a poll conducted between August 18 and 21 involving 2,149 online participants. Those results also showed the opposite sentiments of those reflected in the icitizen poll — that the majority of adults (54%) want Confederate monuments to remain in public spaces while 27% desire their removal and 19% are unsure. Like the icitizen poll, the Reuters numbers also showed opinions split along racial and party lines, with whites and Republicans “largely supportive” of preservation, while Democrats and minorities were mostly in favor of removal.

MSN surveyed a much larger pool of Americans. Its poll drew votes from 874,000 readers on August 15 and 16, and looked at the results based on political affiliation. It found that 71% of Democrats supported the removal of Confederate monuments, while 87% of Republicans did not. In terms of the Confederate flag’s appearance in public spaces, 17% of Democrats agreed that it should not be flown as it represents hate, and 78% of Republicans wanted to leave the flags up as symbols with historical significance.

These polls drive home what we already know: that Americans are deeply polarized over this issue, which will remain a prominent one as politicians around the country decide what to do with Confederate statues and other symbols of hate on government property, from statues on Capitol Hill to street names in New York City. The votes they cast are ultimately the ones that matter most.