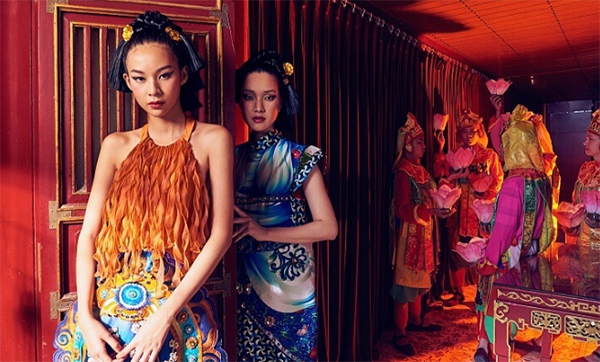 Traditional patterns, paintings, fabric and other material are proving to be a cultural treasure house for many contemporary Vietnamese fashion designers.

“I believe that the Vietnamese culture is attractive and diverse enough for people in the fashion industry like me to tell cultural stories on their designs,” Nguyen said.

Nguyen has already showcased many of her designs that highlight Vietnamese fabrics and patterns to international acclaim on runways in New York and Paris last year.

For several years now, Vietnamese fashion designers have been using national traditions and culture as inspiration for their new creations and presenting them to domestic and international audiences. Clothes with the “tho cam” (brocade) patterns and featuring folk art themes are not unusual finds in today’s market.

And it is not just patterns or fabrics that are traditional sources of inspiration. Traditional rituals can also inspire.

Also last year, for the first time, the costumes used in “hau dong”, a traditional practice in the worship of Mother Goddesses, walked the ramp at the Vietnam International Fashion and Beauty Week, courtesy of designer Nguyen Duc Hien.

The traditional outfits with patterns of dragons and phoenixes in the collection surprised a lot of fashion lovers, not much aware of “hau dong.”

“I hope that my collection will help every Vietnamese citizen, particularly children, to remember and understand Vietnamese fairy tales better,” said Han, who has earlier used the Hang Trong traditional paintings as inspiration for another collection.

Perhaps Vietnam’s most famous designer today with an international clientele of high-profile celebrities, Nguyen Cong Tri has been a leading figure in introducing Vietnamese silk to the world.

He is also known for his use of other Vietnamese materials like rice, hemp fabric and cotton in his outfits ranging from haute couture to ready-to-wear.

In 2016, Tri impressed fashion lovers at the Tokyo International Fashion Week with his “Lua” (Rice) collection that had 41 designs inspired by the wet-paddy rice cultivation, the backbone of Vietnamese civilization.

In particular, Tri used Lanh My A, a natural silk woven and dyed with local fruit from the southern province of An Giang. The fabric, once known by all but only afforded by a few, is known for being cool in the summer and warm in the winter. 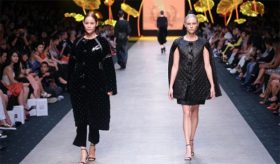 In his ‘Rice’ collection, designer Cong Tri used the legendary Vietnamese Lanh My A silk, available only in jet black. Photo courtesy of Cong Tri.

Later, at the Paris Fashion Week in France, Vietnamese designer Patrick Pham introduced couture dresses and accessories handmade with Vietnamese traditional fabrics, including Lanh My A and fabric made of lotus.In September 2019, at the Vietnam Fashion Week in Hanoi, as many as eight of 15 collections used traditional materials. Phuong Thanh used silk made from traditional villages across the country; Huyen Nhung Nguyen combined silk with tafta and traditional velvet, and a domestic brand introduced jeans with hand woven brocade fabric.

Pham said he had spent six months traveling through many mountainous provinces and southern traditional craft villages to get inspiration.

“It (the traditional culture) is a treasure that I would love to introduce to international fashion lovers,” he said.

With a myriad of traditional features that can be exploited, especially with Vietnam having many traditional villages producing fabric and other products, fashion designers can find everlasting inspiration.

Painter Le Thiet Cuong said: “I have traveled among countries in Europe without caring about their borders, but I saw languages, signs and architecture become different when I arrived in a new country. That’s because their cultures are distinctive. When other differences fade, culture gives us our distinction. Fashion can help spread Vietnamese culture.”