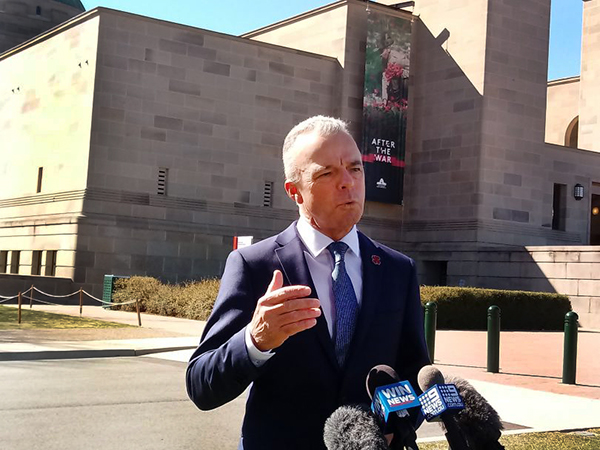 Dr Brendan Nelson AO has been appointed as a member of the Council of the Australian War Memorial.

Dr Nelson fills the Council position vacated by outgoing member Mr Kerry Stokes AC, who is standing down after 15 years of exceptional and dedicated service, including as Chairman for more than six years.

Minister for Veterans’ Affairs and Defence Personnel Andrew Gee said Dr Nelson’s appointment would allow him to continue to serve the Australian War Memorial through its historic redevelopment.

“In the seven years Dr Nelson was Director of the Australian War Memorial he worked tirelessly to ensure it remained at the forefront of our nation’s story of service and sacrifice,” Minister Gee said.

“He built a legacy of innovation and inclusion in his time as Director, overseeing the centenary of the First World War and the major refurbishment of the galleries which record our involvement in that conflict.

“While serving as Australia’s Ambassador to Belgium, Luxembourg, the European Union and NATO, he witnessed the daily Last Post ceremonies at the Menin Gate in Ypres, and the impact this moving act of remembrance had on the community.

“It is thanks to his guidance, that we now have a daily Last Post ceremony at the Australian War Memorial, which gives all Australians the opportunity to remember and honour the sacrifice of the more than 102,000 Australians who have given their lives in service.

“His long history of service to the Australian people as a medical practitioner, member of the Australian Parliament, diplomat and business leader will also bring a wealth of experience to the Council.

“Dr Nelson served as the Minister for Defence during ADF deployments to Iraq, Afghanistan, East Timor and the Solomon Islands, ensuring a special understanding of the stories that will be told through the Memorial’s redevelopment.

“Our War Memorial is sacred to Australians as a place of solemn reflection and pride in our nation’s history of service. Generations of Australians have a special connection and bond to it through their own story of service and sacrifice or that of their family. I am very pleased Dr Nelson will again bring his passion and energy to it.”

Minister Gee also thanked outgoing Chair of the Council Mr Kerry Stokes AC for his outstanding dedication to the Australian War Memorial, the culmination of which is evident in the delivery of the $500 million expansion of the Memorial.

“Mr Stokes has served on the Council of the Australian War Memorial for the last 15 years, and as Chair since 2015, playing a critical role in maintaining and developing the nationally significant institution,” Minister Gee said.

“On behalf of all Australians, I thank Mr Stokes for his passion, leadership and vision, as demonstrated by his induction as a Fellow of the Australian War Memorial in November 2015.

“Since inception Mr Stokes has overseen the commencement of the building works for the expansion of the memorial’s exhibition spaces. He has also been a major benefactor to the Memorial over many years and his passion and respect for the sacrifices made by our service men and women has been evident in the many hours he has devoted to his role as chairman.”

He also donated to the Memorial an extremely valuable collection of First World War glass plate negatives from the Thuillier estate in July 2011.

Mr Stokes said “I have enjoyed every moment in working with the dedicated staff and council of the Memorial over the last 15 years and will continue to follow closely the progress of construction to expand the facility in Canberra over the next few years.

“The Memorial holds a special place in every Australian’s heart and I am proud to have played a role in its development. I am sure Brendan will again make an important contribution in his new role”, he added.

“I want to thank both Mr Stokes and Dr Nelson for their contribution to the Australian War Memorial and our nation more broadly. I wish them both all the best for the future,” Minister Gee said.

The Council of the Australian War Memorial will decide who will replace Mr Stokes as Chairman.

Dr Brendan Nelson has served the Australian public for more than three decades, working as a medical practitioner from 1985-1995 and serving as the youngest-ever National President of the Australian Medical Association from 1993 to 1995.

After entering politics and being elected as the Member for Bradfield 1996, he spent more than 13 years as a Member of the House of Representatives, serving as the Minister for Defence, Minister for Education, Science and Training, and as the Leader of the Opposition.

In 2016 Dr Nelson was appointed an Officer of the Order of Australia (AO) for his services to the community, the parliament of Australia, diplomacy and cultural leadership.