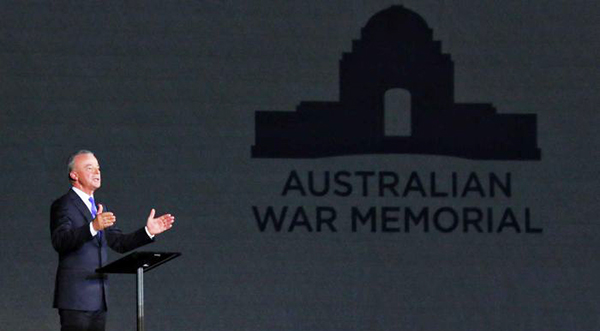 Brendan Nelson has been at the helm of the Australian War Memorial for seven years.

Australian War Memorial director Brendan Nelson will step down from the role at the end of his current term, launching a “nation-wide, merit-based” search for his replacement.

Veterans and Defence Personnel Minister Darren Chester today announced that Dr Nelson had informed AWM staff that he would leave the top job at the end of the year, after a seven-year stint.

It is unclear who will replace him, but Mr Chester said any new appointment would have “big shoes to fill”.

Dr Nelson’s departure comes at a time of change for the War Memorial with a planned multi-million dollar redevelopment and wide reporting that former prime minister Tony Abbott is in contention for a seat on the War Memorial board.

But when asked if Mr Abbott would be considered for the role of director, Mr Chester said he would not speculate about who would or would not apply.

“It’s a merit-based selection process where people will be invited to apply for interest in the role, we’ll start advertising in a matter of days,” he said.

“The person who takes on that role will obviously have to demonstrate the leadership skills required to lead a reasonably large organisation … they may have served themselves, they may not have, but they’ll need to have empathy and a great commitment to telling the story of Australian servicemen and women.

“I’m not going to suggest who may or may not apply for the job. It’s a nation-wide search now.”

Dr Nelson, a former Liberal opposition leader, said he was humbled and privileged to have helped lead and shape the War Memorial.

“It has been certainly the most emotional and meaningful job that I have ever had the privilege to do,” he said.

“The thing that makes me most proud is that young veterans, young servicemen and women and their families, now regard this place as being as much their spiritual home as it is for earlier generations of Australians.

“Even my harshest critics I think would accept that the Australian War Memorial today is a different institution, has a different place and a different meaning to Australia than it perhaps did seven years ago.”

Dr Nelson has been one of the main proponents of the Memorial’s $500 million redevelopment, but it will be his predecessor that will see the project come to fruition.

“If I was to stay, I’d need to stay for another eight years to see the project fully through, and I don’t think that’s in the interests of the memorial,” he said.

Mr Chester said despite Dr Nelson’s announcement, the redevelopment would move forward “as scheduled, as planned, and within the budget envelope that was set by the Government last year”.

“The plans for the redevelopment, under Brendan’s watch along with chairman Kerry Stokes, are going to fundamentally allow more younger Australian veterans to have their stories told, in a more timely way,” he said.

Mr Chester thanked Dr Nelson for his “enormous contribution to Australian public life”, ranging from his role as a doctor with the AMA, to his time in politics, including as defence minister and opposition leader.

He said over the past seven years, he had provided an “extraordinary service” to the War Memorial.

“Under his watch we’ve seen innovations such as the nightly Last Post Ceremony being introduced,” he said.

“It’s been, I think, one of great innovations in terms of providing more accessibility for all Australians to hear the stories of our serving men and women and their sacrifices.”

Opposition Leader Anthony Albanese also thanked Dr Nelson for his service and said his successor would face a daunting task replacing him.

“He has been a quite extraordinary leader at the Australian War Memorial,” he said.

“He’s done an incredible job lifting its profile up amongst Australians and international visitors.

“It is a sacred place for Australians. It’s one which we should all respect and it’s one which Brendan Nelson has brought his considerable capacity, enthusiasm and diligence in that job and I pay tribute to him.”