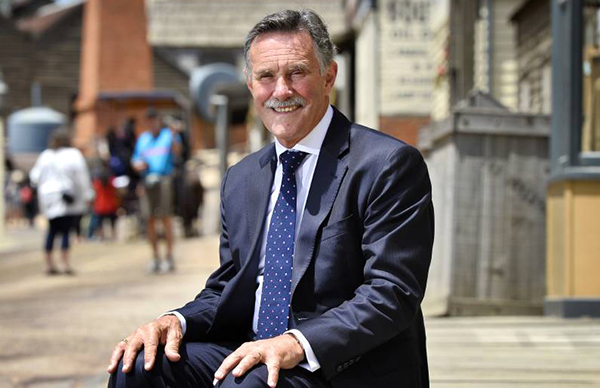 Former head of Sovereign Hill Jeremy Johnson has been awarded an AM in the Queen’s Birthday Honours list.

Jeremy Johnson looks back on his life as a seventh generation Australian with convict ancestry and is full of pride knowing where his family name has come.

Mr Johnson, the longtime chief executive officer at Sovereign Hill, has been named a Member of the Order of Australia (AM) for his years of service to the tourism industry and Ballarat community as a whole.

“These things come along unexpectedly and at the same time it’s a great privilege,” Mr Johnson said.

“My ancestors would be amazed to think someone in the family has achieved such an honour.

“It’s a great personal pride when something like this comes along and it makes me reflect on all the support I’ve received.”

It’s been quite the career for Mr Johnson which started in local government in 1972.

Among the roles he has held include chief executive of Sovereign Hill from 2002-18, president of the Victorian Employer’s Chamber of Commerce and Industry from 2008-10, president of the Australian Chamber of Commerce, a role he has held since 2017, chairman, Allocations Committee, Ballarat Sports Foundation 1996-2010 and the longtime chair of the Central Highlands Water Board, since 2010.

But through all his success, one of the most personal has been with his involvement with the Arch of Victory/Avenue of Honour Committee, an association he has had since 1986.

“The Arch of Victory was a labor of love as my grandfather was killed in World War II,” Mr Johnson said.

“I’ve always had a passion to ensure I could help in that area. The Avenue of Honour represents so much of our war history.

“My grandfather never met his eighth child. My grandmother had to bring up the whole family on her own, she did an absolutely incredible job.

“She instilled in us a sense of community and it’s something I’ve lived with my entire life.”
Mr Johnson, who despite growing up on a farm in Westmeadows right next to Tullamarine Airport, said Ballarat was very much his home.

He said he felt incredibly fortunate to be able to be involved in so many roles from a regional base, saying he had never felt the pressure to move to a larger city base.

“Once I left local government behind, the absolute joy has been my association with Sovereign Hill and cultural tourism. The quality of its museum is absolutely world class,” he said.

“Another thing I’m very pleased to be part of was the solution to put water back into Lake Wendouree. The residents of Ballarat are blessed to have such a wonderful waterway.

“When I took up the role, I remember my morning run was around the lake and one day a fellow stopped me who was recovering from a stroke and he said how the lake kept him alive.

“It really brought home to me just how important a treasure it is to Ballarat.”

Mr Johnson is also a life member and long-time vice-president of the Ballarat Miners Basketball Club and for 15 years on the tribunal of the Central Highlands Football League.

He was also the chairman of the Tourism Excellence Working Group with Tourism Victoria form 2004-2016 and a member of the Council of Australasian Museum Directors, 2002-2018.