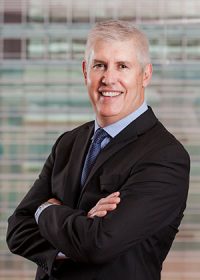 Dr Jim Thompson as the new Director and CEO of Queensland Museum Network.

Queensland Museum Board Chair David Conry says the CEO was selected from a competitive process and strong field of national and international candidates.

“Jim’s experience in the science and government sectors, and his leadership in the last 15 months made him an outstanding candidate to strengthen and revitalise the future of the museum.”

“The Queensland Museum Network has an incredibly rich history, and the brightest of futures. I’m delighted Dr Thompson has been appointed CEO of Queensland’s iconic museum network,” he said.

“Dr Thompson has shown great leadership while acting as CEO of the Queensland Museum Network and I’m delighted he will continue in this role,” Ms Enoch said.

“He has guided the museum through a busy period, during which it delivered the third World Science Festival Brisbane, opened the new SparkLab Sciencentre and Anzac Legacy Gallery at its South Bank campus, and refreshed science galleries across the network.

“The Queensland Museum Network attracted an impressive 2.43 million visitors in 2017-18, showing that locals and visitors are responding with passion to its inspiring and innovative exhibitions and programs.”

Dr Jim Thompson said he was looking forward to being the custodian of Queensland’s state museum. “It is a great honour to lead an institution that showcases the state’s best cultural treasures and brings 14 million research and collection items in natural, biodiversity and social history to life.”

“I am extremely proud of the contribution the Queensland Museum Network makes every day – across our state, nationally and globally – and I am excited about working on the vision for the network’s future.” Dr Thompson said.

The Queensland Museum Network is set for another ambitious year in 2019 with the World Science Festival Brisbane on again in March, the reopening of the Discovery Centre and a new temporary exhibition hall suitable to host 1000 square metres and a major international exhibition soon to be announced.

About Dr Jim Thompson
Dr Thompson has an extensive career in the areas of research, policy and the public sector. He has a PhD in Wildlife Management, a Master of Resource Science and a Bachelor of Science  (Hons) in Zoology/Animal Biology.

Jim was previously the Chief Biosecurity Officer at Biosecurity Queensland since 2011. Jim began at Queensland Museum in September 2017 and was awarded a public service medal for service.

The network is an established leader in STEM engagement, enhancing Queensland’s profile as a knowledge economy and positioning the state as an international hub for scientific thought leadership. The network holds exclusive license in Asia Pacific to host the World Science Festival Brisbane in March every year until 2021.

Positions Vacant » View All
» Web Developer – Australian War Memorial
» Strategic Communications Manager – AWM
Latest News » View All
Pandemic polemics: Met’s off-key NPR msg
v Cleveland’s harmonious storage show Read more.
Te Papa uses Eggfruit in Making Histories
Communities & Covid-19 conversations Read more.
Cora-Allan Wickliffe revives Niuean hiapo
- works held in AWMM & TePapa collections Read more.
Wrasses dazzle: how fairy wrasses got
their flamboyant colours - USyd & AMRI Read more.
Samuel Review: EPBC poor on IK & views
- still to be incorporated in stds proposal Read more.
Top +
Council of Australasian Museum Directors, c/o Ms Daryl Karp, Museum of Australian Democracy at Old Parliament House PO Box 3934 Manuka, Australian Capital Territory 2603 Australia, © CAMD 2021
Copyright: All information and resources provided on this website remain the copyright of the Council of Australasian Museum Directors. Permission is granted for viewing and downloading for personal and not for profit purposes. Those wishing to reproduce any materials for commercial, educational or other uses are requested to contact us.
Disclaimer: The content of this website is provided for information purposes only and is not intended as a substitute for professional advice. No claim is made as to the accuracy or authenticity of the content of the website. The Council of Australasian Museum Directors does not accept any liability to any person for the information or advice (or the use of such information or advice) which is provided on this website. The information on our website is provided on the basis that all persons accessing the site undertake responsibility for assessing the relevance and accuracy of its content. No responsibility is taken for any information or services which may appear on any linked web sites. Hostgator.
.