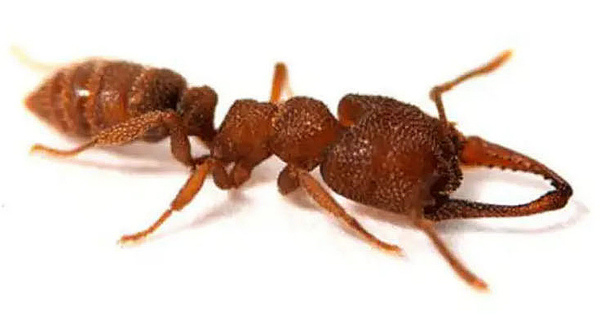 The agile Dracula ant is the fastest animal in the world. Credit: Adrian Smith.

It is a good thing the Dracula ant is not the size of a crocodile, because their jaws snap shut 5000 times faster than the blink of an eye.

While cheetahs and great white sharks usually come to mind when considering the fastest movers in the animal kingdom, the title actually belongs to an Australian ant.

The speedy little Dracula ant has just set a new record for having the fastest animal movement on earth.

American scientists have used high-speed video to record their jaws going from zero to about 320km/h in 0.000015 seconds.

The agile ant uses a snapping mechanism to quickly slide their mandibles across each other – just like a finger snap.

Dracula ants get their name from their strange desire to suck the blood of their children, senior curator of insects at Queensland Museum Dr Chris Burwell said.

Dr Burwell said the adult worker ants pierce the skin of their babies to drink their blood – but fear not, the babies survive.

Australian green thumbs need not worry about coming across one of these predatory critters in their backyards. The Dracula ant is elusive and generally likes to snack on centipedes.

It is also only found in northern Australia.

The American scientists, who have published their findings on the Dracula ant in the Royal Society Open Science journal, said animal speed is crucial knowledge and can determine whether animals are predators or prey.

The speedy arthropod has developed latches and springs in its jaws to overcome the limits of muscle power, which allows it to compete for food.