You are here: Home » Articles filed under: 'News' » Article: 'Drawing in museums' 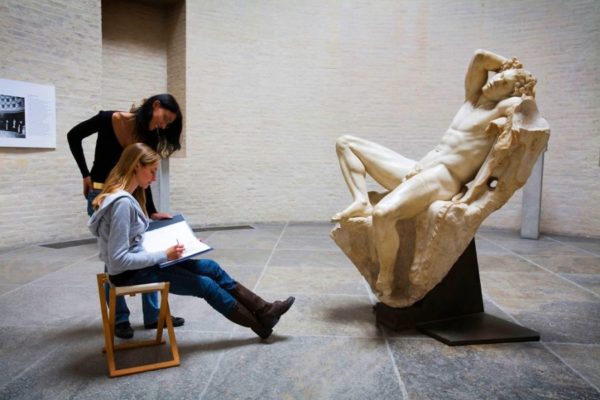 Alice Sprawls, Drawing in museums is a form of respect – let’s not ruin it, Apollo The International Art Magazine, 30 April 2016

At lunchtimes, I go to the British Museum to draw. It’s never not full of school children, performing their dutiful rites in the Egyptian rooms – cataloguing mummification urns and cat gods – or sitting on the floor in the Anglo-Saxon galleries, listening to stories of Sutton Hoo. There are tourists too, thousands of them, there for the Rosetta Stone and the Elgin Marbles. My favourite subjects, the Cycladic sculptures, are dotted along a corridor between the entrance shop and the café. I don’t mind: no one expects to the find the British Museum empty anymore; it’s an effective modern machine, not a sleepy repository of treasures. But I do think I’ve as much a right to be there as anyone else: it’s not I who get in their way, it’s they who get in mine; standing in front of Lely’s Venus to take pictures while I pause, mid stroke, and try to hold the image in mind until they move on. Some days you can’t catch more than a few seconds’ continual study, so I go to the quieter rooms – Ancient Crete, say – and look at things there.

It’s not only art students who sketch in museums and galleries, though I did lots of it when I was one. Drawing is a form of knowing; the best way, I think, of seeing. At the very least it shows how little you really see when you’re not drawing. The work isn’t in the hand so much as the mind – it’s not dexterity you gain especially, nor do you always get better at making things on paper look as they really are, but you start to alter the way you see them in the first place. You learn to flatten and expand space, to fix things in the mind’s eye; not just to arrest them, like a camera, but to hold the aspects in relation to one another as you move between and over them. The hand is just the extension of the mind, concentrated through the eye, hovering, taut and drawn out; and you try to keep it there, poised, as you work and rework what you see. You stop hearing the voices around you or noticing the people walking back and forth. Time passes in an instant.

Positions Vacant » View All
» Collections and Database Administrator – QVMAG
» Team Leader Learning & Engagement – QVMAG
Latest News » View All
HTSA secures new North Terrace home
in former Electricity Trust heritage bldg Read more.
ANMM Lunar Sea Chinese NY festival
partnership with China Cultural Center Read more.
AWM’s new galleries take flight
Chinook to join Lancaster in new Anzac Hall Read more.
Pan Arabic “civilisation & art museum“ for
Paris's Arab World Inst’s Jean Nouvel bldg Read more.
British Library £500m community-focused extn
through planning major planning hurdle Read more.
Top +
Council of Australasian Museum Directors c/o Lynley Crosswell, Museums Victoria, GPO Box 666, Melbourne VIC 3001, © CAMD 2023
Copyright: All information and resources provided on this website remain the copyright of the Council of Australasian Museum Directors. Permission is granted for viewing and downloading for personal and not for profit purposes. Those wishing to reproduce any materials for commercial, educational or other uses are requested to contact us.
Disclaimer: The content of this website is provided for information purposes only and is not intended as a substitute for professional advice. No claim is made as to the accuracy or authenticity of the content of the website. The Council of Australasian Museum Directors does not accept any liability to any person for the information or advice (or the use of such information or advice) which is provided on this website. The information on our website is provided on the basis that all persons accessing the site undertake responsibility for assessing the relevance and accuracy of its content. No responsibility is taken for any information or services which may appear on any linked web sites. Hostgator.
.