November 18th, 2021 | Browse other: News. | Tagged with: should we support artists who are predators and bigots?, What Do We Do with the Work of Immoral Artists? | 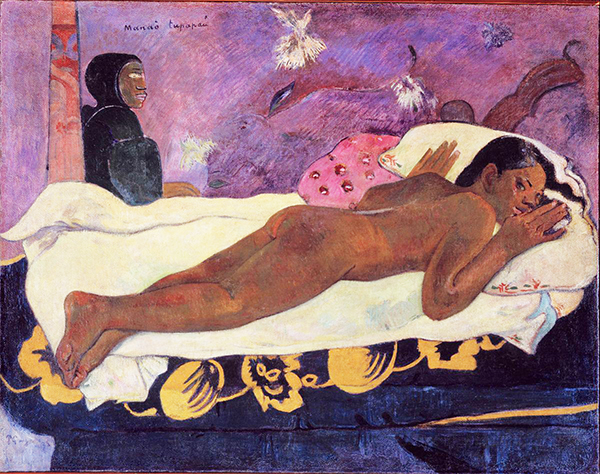 Erin L. Thompson, What Do We Do with the Work of Immoral Artists?, Hyperallergic, 17 November 2021

Where should we “draw the line” between sacrificing great art and supporting artists who are predators and bigots?

Should I display the paintings of a murderer? I’ve been asking myself that since I got an email from a friend of William Noguera, who has been on death row in San Quentin for 40 years. Noguera became an artist in prison, at first making photorealistic ink-stipple drawings and then transitioning to a sinuous abstract style, using colorful paint spiked with ground concrete from the prison yard.

The email passed on a message: Noguera wanted me to curate a retrospective exhibition of his artworks, the products of “decades of a mind struggling with confinement.” Noguera’s works are mesmerizing. But he was convicted of beating a woman to death. I didn’t know what to do.

These days, many of us are similarly wondering how we should consume or promote art made by people we believe have done something heinous. Should we stop streaming the music of R. Kelly or Michael Jackson? Refuse to watch another Woody Allen movie or visit a Chuck Close exhibition? Erich Hatala Matthes, a philosophy professor at Wellesley College, has written a book about these questions: Drawing the Line: What to Do with the Work of Immoral Artists from Museums to the Movies (Oxford, November 1, 2021). I wondered if Matthes could help me decide what to do about Noguera’s proposal.

Matthes writes clearly and engagingly, using helpful examples and comparisons. Reading the book feels like spending time with a very smart friend who’s thought deeply about the issues. Or, rather, like spending time with a set of smart friends, since the author, a white man, takes care to bring in a diversity of opinions on “problematic faves” and cancel culture from thinkers including Lyra D. Monteiro, Loretta Ross, and Osita Nwanevu.

Matthes asks where we should “draw the line” between sacrificing great art and supporting artists who are predators and bigots. When laying out the questions we might ask about their art, he often returns to the 1994 song “Age Ain’t Nothing but a Number,” sung by the then 15-year-old Aaliyah and written and produced by the man to whom she was secretly married, the then 27-year-old R. Kelly.

“Let me show you to ecstasy,” Aaliyah sings. “Boy be brave — don’t be afraid.” In the song, Matthes writes, “Kelly is using his actual child bride as a mouthpiece to vindicate his exploitative relationship with her” — thus exploiting her all over again. While Matthes finds R. Kelly’s actions morally wrong, he argues that ceasing to listen to the artist’s music is not the only ethically valid response. We can still consume art made by immoral artists, as long as our relationship to this art doesn’t help the artist commit more wrongs or demonstrate a painful lack of solidarity with the victims.

Matthes reassures readers that our individual consumer choices won’t make enough of a financial difference to a living artist to put us on ethically problematic grounds. The same goes for re-watching your old DVD of Manhattan or checking out Gauguin’s paintings of Tahitian women. He compares these choices to climate change: boycotting these artists, like composting food scraps, might feel good … but neither is going to resolve issues that need collective, structural solutions.

Yet, even if engaging with an artwork isn’t wrong, per se, Matthes makes a clear case that we can trip up in the way we engage. Our public consumption of art can signal, even if unintentionally, approbation of its creators’ heinous acts. And since “you can’t drive around blasting R. Kelly on your stereo and yell to each individual person that you pass: ‘I do not condone R. Kelly’s behavior! This song just slaps!,’” he suggests you put on your headphones to listen instead.

The calculus also changes for those in a position of influence or authority. You might be able to help stop a predator by denying them the fame and money that enable their exploitative acts. Or, if you consider the artist’s work significant enough to deserve a public audience, you might figure out a way to tell this audience the truth about its creator. For example, Matthes suggests museums add signage to displays of the works of immoral artists, just as he tells his students about Immanuel Kant’s abhorrent racist beliefs whenever he assigns them readings from Kant’s (unrelated) philosophy.

But there’s a big difference between talking to students who are expected to pay attention to their professor and posting a sign in a museum. It’s even more complicated when what’s attractive about the art is closely tied to what’s abhorrent about the artist. For instance, Gauguin’s exotic, erotic Tahitian paintings are so compelling to many viewers because they show their subjects through the colonialist, misogynistic lens that emboldened Gauguin to force himself on Tahitian girls. Research has shown that viewers simply ignore signage that attempts to change views they want to maintain, especially if this would cause uncomfortable cognitive dissonance. I find it hard to believe that most viewers would be willing or able to question their own attraction to problematic aspects of the art … and even harder to believe that many museums would want to risk alienating visitors and donors by asking them to do so.

Even where I disagreed with Matthes, I was thankful for his book. The disagreements helped me get my own thoughts straight. And he would be the first to say that I should disagree with him, since he wrote the book to help us “arrive at your own conclusions about immoral artists.” He thinks we should determine whether their art has enough aesthetic value to justify finding a way to enjoy it without aiding and abetting bad acts. And, he points out, it’s crucial to make this type of determination, since it’s impossible to experience art only made by morally pure people. They don’t exist — we all make moral mistakes. (Matthes specifies that we don’t have a moral responsibility to “go looking for skeletons in the closet of every artist whose work you encounter,” but once we learn about immorality, we have a responsibility to react to that information.)

Learning more about an artist before you make up your mind seemed like a good idea to me, so I ordered Noguera’s memoir, Escape Artist: Memoir of a Visionary Artist on Death Row (Seven Stories Press, 2018). While reading it, I remembered Matthes’s discussions about murder; he contrasts an imagined “artist who relished killing and gleefully depicts scenes of their own murders, inviting the viewer to share in their sadistic pleasure” with “an artist who committed murder, but racked with remorse, spends the rest of their life creating artwork that earnestly attempts to grapple with their guilt and shame.” He argues we should reject the art of the gleeful murderer, since it encourages more harmful acts, while learning about the complexities of human experience from the remorseful murderer.

But it’s not so easy to fit Noguera into these categories. He murdered his girlfriend’s mother. He is remorseful for his act and takes responsibility for it, although he claims it happened when he was in a blacked-out rage — from steroids his controlling father insisted he take — and explains he believed she was sexually abusing her daughter. But his art isn’t about the murder. At least, not as far as he knows.

Noguera describes his art-making as “crossing into dark territory where my subconscious and vision became one.” When he picks up a brush or a pen, he abandons himself to the power he can “invoke but not fully control.” The images in his drawings come from his dreams and visions; he hopes to “fill the viewer with the very emotions that possess me when I create.”

Noguera fights to exhibit his art outside his prison because he wants the world to recognize his strengths and skills. He fears his execution, when he would become “nothing but a spectacle in a macabre theater,” with the “most intimate moment” of his death “a stage performance with a gawking audience … on the other side of clear Plexiglass.”

It took me months to finish reading Escape Artist — partly because it was wrenching enough that I needed breaks to recover, but mostly because I had so much other stuff to do. Matthes insists that we take the time to come to our own decisions about art, but we don’t have nearly enough time to do so for every artist. This is another reason I resist his argument that museums can still display the art of notorious predators and bigots. A recent study found that 85% of the artists in the collections of major museums in the United States are White, while 87% are men. In the collections of the National Gallery of Art, for instance, over 97% of the artists are white. In short: we have plenty of White male artists on display in our museums. Shouldn’t we use our time, space, and funding to explore the work of artists who haven’t gotten the chances these established artists have had? Artists like, say, Noguera — a first-generation Colombian-American immigrant, who uses his self-taught technique to break a window into the hidden places of incarceration?

Maybe I should curate Noguera’s exhibition. Or maybe I should use my time to promote another artist who has committed less harm. Maybe I should stop teaching Caravaggio — another murderer who received a death sentence. I don’t know; I’m still debating. But I am convinced, after reading Matthes’s book, that we can act ethically when we marvel at an artwork produced by an immoral artist — even if the artwork is intimately connected with that immorality and even if the work itself makes us deeply uneasy. It is precisely through art that we can explore human darkness without falling into it entirely.

See also: Eric Gill: can we separate the artist from the abuser?