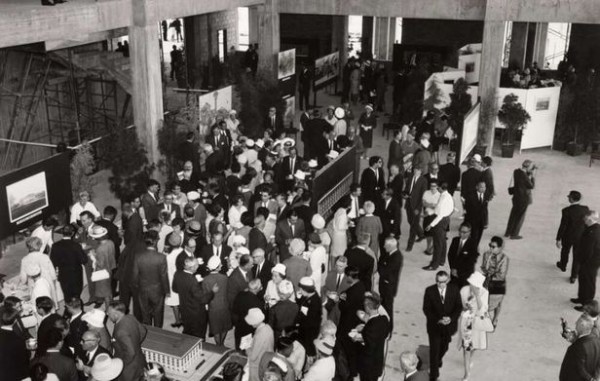 Why did Robert Menzies, no longer prime minister, lay the National Library’s foundation stone fifty years ago? Robyn Holmes scoured the archives to unravel a mystery.

To the left of the National Library of Australia’s main entrance steps you will discover the modest foundation stone laid by Sir Robert Menzies fifty years ago, on 31 March 1966, when the library building was still a five-storey steel shell. Modest, that is, compared with the plaque that marked the grand opening of the building by prime minister John Gorton on 15 August 1968.

If celebrations that day in 1966 belonged principally to the national librarian, Harold White, the foundation stone ceremony represented a pinnacle for Menzies. Yet the words “prime minister” do not appear on the stone, because Sir Robert, aged seventy-one, had resigned his office and handed over to Harold Holt two months earlier, a fact that required an unexpected rewording of its text.

So why did Menzies lay the stone, overturning the protocol appropriate to Holt’s office? It’s true that both the new and the old prime minister appeared with their wives on stage, alongside interior minister Doug Anthony and the chair of the Library Council, Sir Archibald Grenfell Price, but it was Menzies who retained the starring role.

It was a celebratory and fitting finale for Menzies, for his vision and leadership underlies the backstory of the approval, timing, design and construction of this monumental building on its remarkable lakeside site. The Canberra Times headline captured it that day: “Dream Library Takes Shape.”

Menzies never claimed the vision of the National Library as his own – neither the Library’s independent governance nor the building. For that, he acknowledged Harold White and Sir Archibald Grenfell Price as tenacious leaders among many cumulative forces. As he said in his speech, the legislation establishing the Library and the associated Australian Advisory Council on Bibliographical Services was a “statesman-like act” of national cooperation. Yet it was Menzies’s conviction and authority that carried the day with his cabinet colleagues, shaped and overrode the decisions of the National Capital Development Commission, or NCDC, and conveyed the vision of why a great National Library mattered.

In a remarkable speech that he wrote himself and typically delivered only from notes, Menzies asserted with considerable force that the real value of the library lay not in the monumental building, despite its symbolic beauty, grandeur and classical dimensions. Rather, its true quality and international stature lay in the collections contained within the building. These were the “great interpreters of the past to the present… the present to the present… and the present to the future.”