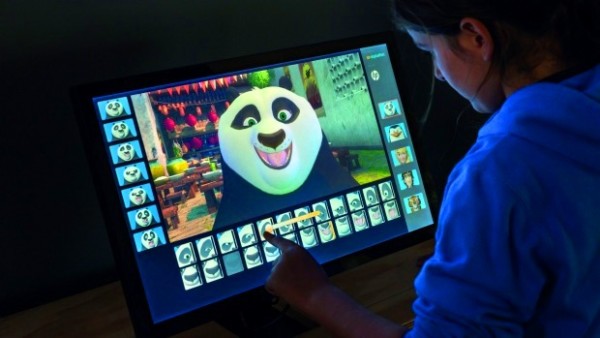 People will be able to make their own animations at the DreamWorks Animation Exhibition coming to Te Papa this summer. Source: stuff.co.nz.  Photo: Mark Ashkanasy.

The secret to how Shrek went from a pencil sketch to a giant green ogre with a swagger is coming to Te Papa.

An animation exhibition laying bare 20 years of creative vision behind the lovable ogre and 30 other DreamWorks films will be on display at the national museum in Wellington from December.

DreamWorks Animation is the brains behind How to Train Your Dragon, Madagascar, Kung Fu Panda and, most recently, Home.

Fans would be able to see how Melman the giraffe, Po the panda, Wallace and Gromit, and others were brought to life, watch behind-the-scenes interviews and make their own animations, Te Papa communications manager Kate Camp said.

One of the most popular elements of the exhibition in Melbourne was a simulated dragon ride based on How to Train Your Dragon.

“It’s a 180 degree experience, so you can be on the dragon’s back flying over the world.”

When asked whether the exhibition was too low brow for the country’s national museum, she said those days of judgement had passed.

“I think we’re living in a time where we don’t have to make those distinctions.

“People love what they love. People might be reading War and Peace one day and watching Shrek the next.”

“But equally we choose things based on whether they’ll be of interest, and we think this one will,” Camp said.

When Te Papa’s chief executive, Rick Ellis, took up the position last year, he vowed to make the national museum an innovative world leader, including extending the museum’s digital focus.

Two of Te Papa’s most popular exhibitions had been under Ellis’ watch, and combined digital experiences with real objects.

“Of Te Papa’s top three exhibitions of all time, the Air New Zealand and Gallipoli exhibitions are second and third. It’s been a bumper year,” Camp said.

The museum’s most attended event was the Kia Ora Kiwi defence exhibition in 2000.

Wellington City councillor Jo Coughlan said the exhibition would be a huge draw-card for Wellington across the summer.

“Te Papa has been having a great year, very strong in terms of the Gallipoli and Air New Zealand exhibits having been very successful, so I think Te Papa’s been on a real roll.”