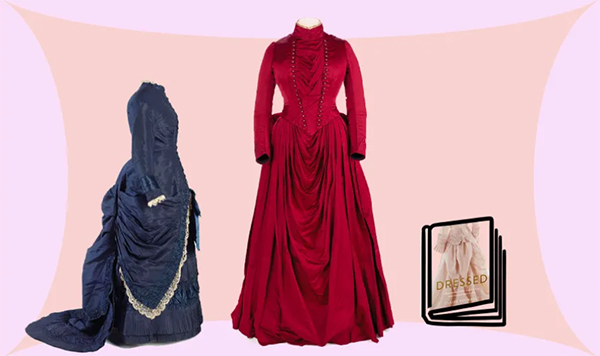 The best-dressed book at this year’s Ockhams (Photos: Supplied).

“Don’t judge a book by its cover” is a terrible metaphor. You shouldn’t judge people by their looks, but you absolutely should judge a book by its cover. It gives you essential detail: the title, the author, and a vibe. It also gives you essential information about care and time. A book with a good cover has probably had a lot of love and effort put into it.

Dressed is a book that you can and should judge by its cover. To look at: a beautiful beige dress, billowing against a millennial pink background. But then you pick it up and it’s like holding an especially tough cushion. The cover is matte, foam-padded, with a sumptuous give to it. You might as well be holding one of the garments that Regnault discusses (and examines with the kind of loving detail reserved for a scholar). How often do you find a 400-plus page book that actually feels good to read? 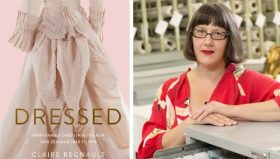 Claire Regnault and her Ockham-shortlisted beauty of a book (Photo: Supplied).

It makes sense that a book about fashion – literally the human version of a book cover – should have such a good cover. But the quality of Dressed goes deeper. This is a meticulously researched, well-detailed look into fashion, an art and a craft that can often be dismissed as frippery. It’s not, obviously: the history of fashion is deeply entwined with the history of the world. Fashion is art, fashion is economics, fashion is culture, fashion is function. World history didn’t happen naked (except for all the times it did, I suppose).

Regnault sums up her thesis, and the scope of her project, early on: “Every garment prompts a set of questions: Who made it? Who wore it and where, and what were their lives like?” 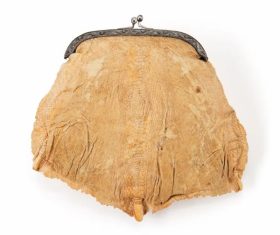 Regnault’s writing is, as expected, excellent. She talks about the garments and the history behind them with a scholar’s eye for detail and context. There’s no way you can talk about 19th century New Zealand history without talking about colonialism – hell, there’s no way you can talk about anything post 1840 without talking about colonialism – and fashion is no exception. Particularly telling are the passages that deal with how fashion ended up being a conversation between early settlers and Māori, with people on both sides taking from each other’s culture liberally, and with delight. (Side note: I was fascinated by the sheer amount of animal product that was used in our fashion, although I suppose an albatross-foot handbag is not so different from a crocodile handbag, albeit a bit less regal.)

Perhaps the most revealing thing that Dressed impresses, quietly, but confidently and consistently, on the reader is that New Zealanders cared, quite deeply, about their fashion. What we wore wasn’t just about vanity, it was deeply functional. Garments had to stand up to being worked in, played in and lived in, and so people, especially women, often had things custom made, picking out their materials. It’s a trend we’re hopefully returning to – that idea of having signature garments rather than just, say your average Hallensteins suit or AS Colour tee. 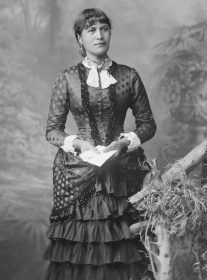 Hūria Mātenga, a woman who knew what she wanted and where to buy it (Photo: Nelson Provincial Museum).

Regnault’s writing is particularly delightful when she zeroes in on specific people and incidents, like Hūria Mātenga (pictured above), a Māori woman who vastly preferred to buy her gowns in Europe rather than have them made in Nelson. Regnault uses this as a way to point to other developments (by the 1870s “most Māori” had adopted European-style clothing in addition to, or even replacing their own garments). Each is a reminder: as a garment is made out of countless materials and threads, history is made up out of countless people. What people did is important, but what people wore is an important layer of context and information.

Regnault doesn’t lack for humour either – she’s aware of the hypocrisies and eye-rolling social mores of the time. One of my favourite passages, in the “active woman” section, revolves around Hilda Hitchings, a 5’11 woman who won the New Zealand Ladies Tennis Championship in 1894, but who we are assured, tongue in cheek, was also “well versed in those domestic duties which make the salt of life and without a knowledge of which no girl can be called educated”. Message received! 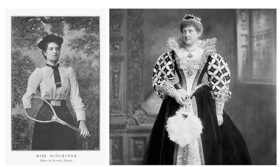 She spends multiple pages talking about the Ranfurly Ball at Government House in 1898, which one Lavinia Coastes attended as Queen Elizabeth, in a “handsome black velvet gown, bodice and sleeves of white quilted satin braided with silver and pearls”. It’s a great way to discuss multiple elements of fashion – not only what people considered fancy dress, but the undeniably racist stereotypes that people engaged in at the time (Charles William Cox dressed as “Chief of the What-is-its”).

Regnault’s vivid descriptions are supported by photos both archival and current, and it’s the current photos that make Dressed such a vital, and fascinating, document. Dozens of garments have been specially mounted on custom mannequins to be photographed – a process which is described at length towards the end of the book. In an interview with Te Papa Press, she makes an astute observation that part of the reason why a book like this hasn’t been done for almost 50 years is because of the difficulty and expertise involved in the photography.

The wedding dress (centre) had a detachable train; the dress at left was mail-ordered from London; the newspaper dress was made for a Canterbury Times competition in 1908 (Photos: Te Papa; Canterbury Museum).

“It’s not simply a matter of slipping the garment from its box over the shoulders of a ready-made dress form,” Regnault said. “Their shoulders are too broad, their waist and busts often too big.” Each garment has also, clearly, had a tremendous amount of thought put into how it looks – from framing, to lighting, to the angle, as explained in the last section of the book: “Good lighting captures the the true nature of the material and translates the visual into visceral, such as the glowing sheen of silk satin or the sumptuous texture of velvet.”

The work’s paid off. 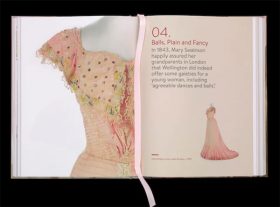 Yes to the dress (Photo: Supplied).

Seeing the photos of garments in Dressed is about as good as seeing them in person. You can see every crease and wrinkle of a purse made out of an albatross foot (above, as gross as it sounds); each pleat of a wedding dress. In the middle of the book there’s even a sampler of patterns used during the period, captured in vivid detail – get me the “silk velvet with passementerie” used in the 1860s, stat.

Dressed makes an argument that judging a book by it’s (quilted, soft, seriously lovely) cover is not only fitting, but perhaps appropriate. By looking at what people wore, in what context, and why they wore it, we can learn endless amounts. It’s more than gowns, beautiful gowns, it’s history, beautiful history.