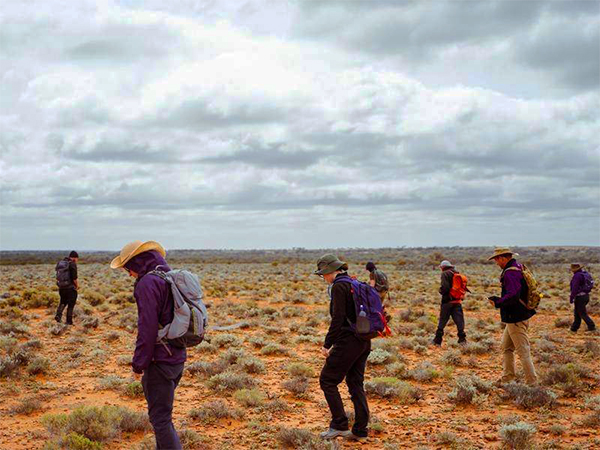 Searching outback areas for meteorites can now be achieved in less than a day by using drones. (GAOFENG NI).

It took a field team all of 10 minutes to track down the first of a series of meteorites thanks to defence satellites, weather radars and drones surveying the South Australian outback.

The discovery came nine years after a six-tonne asteroid crashed through the atmosphere and soon visitors to the South Australian Museum will be able to see the results.

An “unusually large” atmospheric explosion, equivalent to 220 tonnes of TNT, was picked up by US Defence satellites in July 2013.

A total of 44 meteorites were found over the next several days, with a combined mass of just over four kilograms.

The data formed something of a high-tech treasure map and helped researchers from Monash University search a six kilometre “likely fall zone” north of Port Augusta.

An opportunity to find the meteorites was recognised by Hadrien Devillepoix from Curtin University’s Space Science and Technology Centre.

The Bureau of Meteorology had recently made its weather radar data openly available for research.

In the USA, weather radars have been used to track meteorites as they fall and define a search area on the ground.

“We were very excited because a few meteorites have been found using this method using the USA’s radar network,” Dr Devillepoix said.

“If we were to find any from this event, it would be the first time that has been achieved elsewhere.”

A six-kilometre long ellipse was calculated as the likely fall zone.

Artificial intelligence and machine learning was then used to map the meteorite field.

“It typically takes a search team hundreds of hours to fully search such a large area – a drone can do it in less than a day,” Field team member Seamus Anderson from Curtin University said.

Scientists from Monash collected the meteorites, careful to avoid any contamination by microbes from outside the natural environment where the meteorites were found.

“We think that as microbes first move into a new environment, they initially survive by consuming minerals and even gases from the atmosphere,” microbiologist Rachael Lappan from Monash University said.

“This is the ideal opportunity to test out those concepts.”

Scientists from Monash and Curtin are undertaking further research on the meteorites and looking to apply the radar technique to other meteorite falls.

The South Australian Museum will be showing several meteorites recovered from the field at its Six Extinctions exhibit, opening on November 26.